6mm Napoleonic update, and a bit of EPIC too!

I have been generally plodding on with various bits and bobs this week, normal score really, im totally unfocused and cant stick with one project at a time....

First up I have done the movement trays I got from warbases a few months ago. 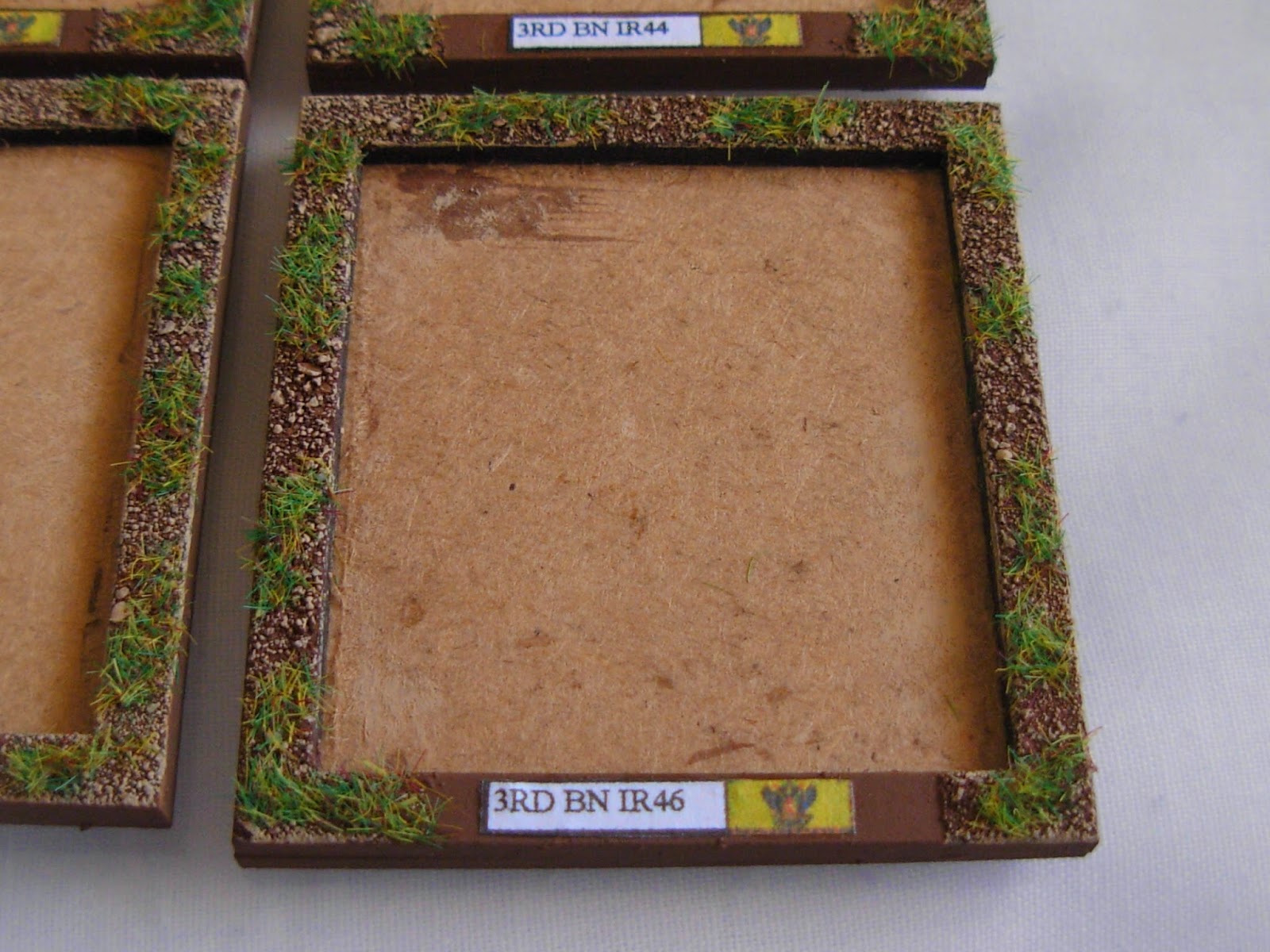 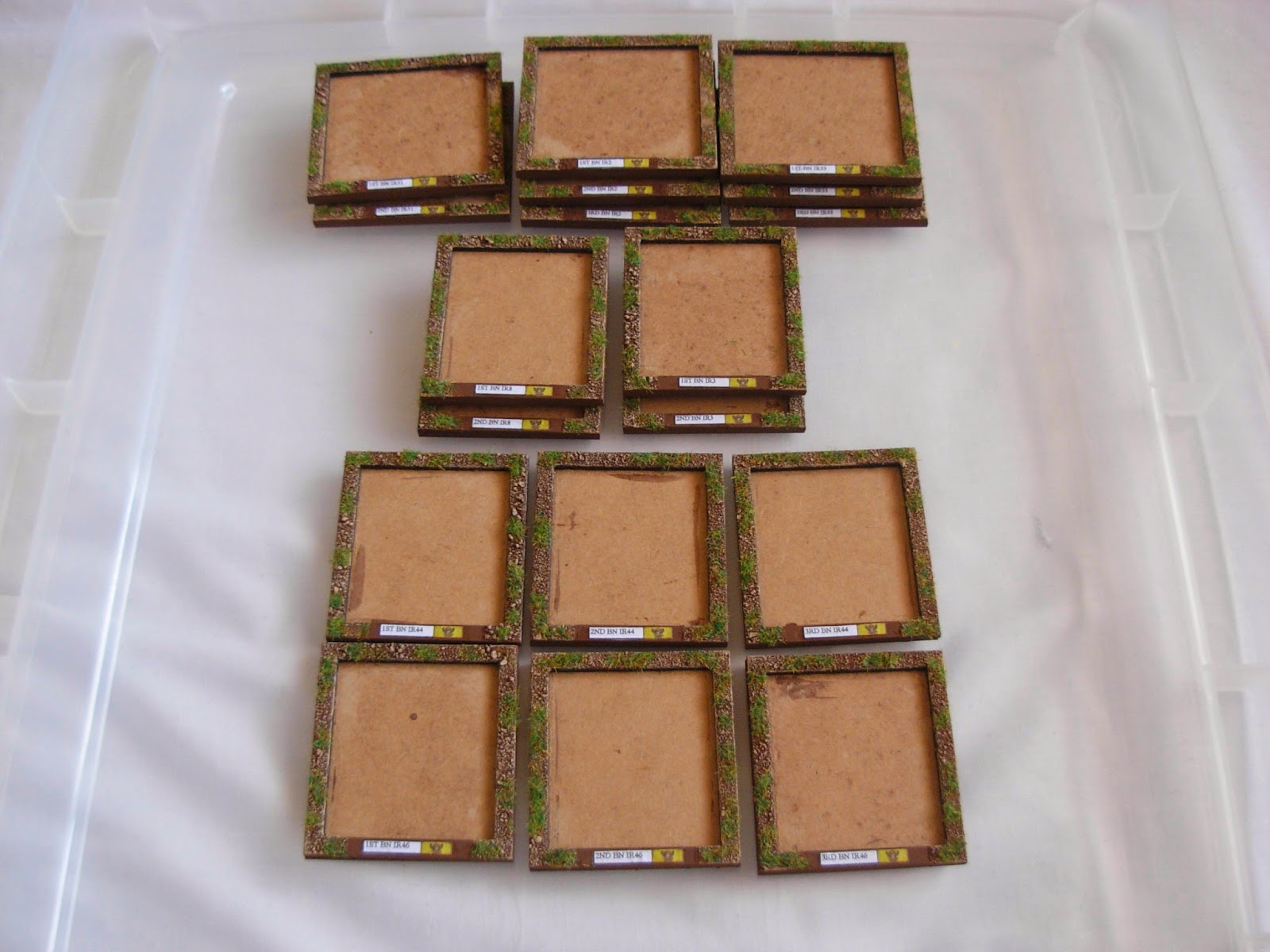 I have made a base for each of my line infantry Battalions, each with their own unit label so there is no confusion who is who during the heat of battle! 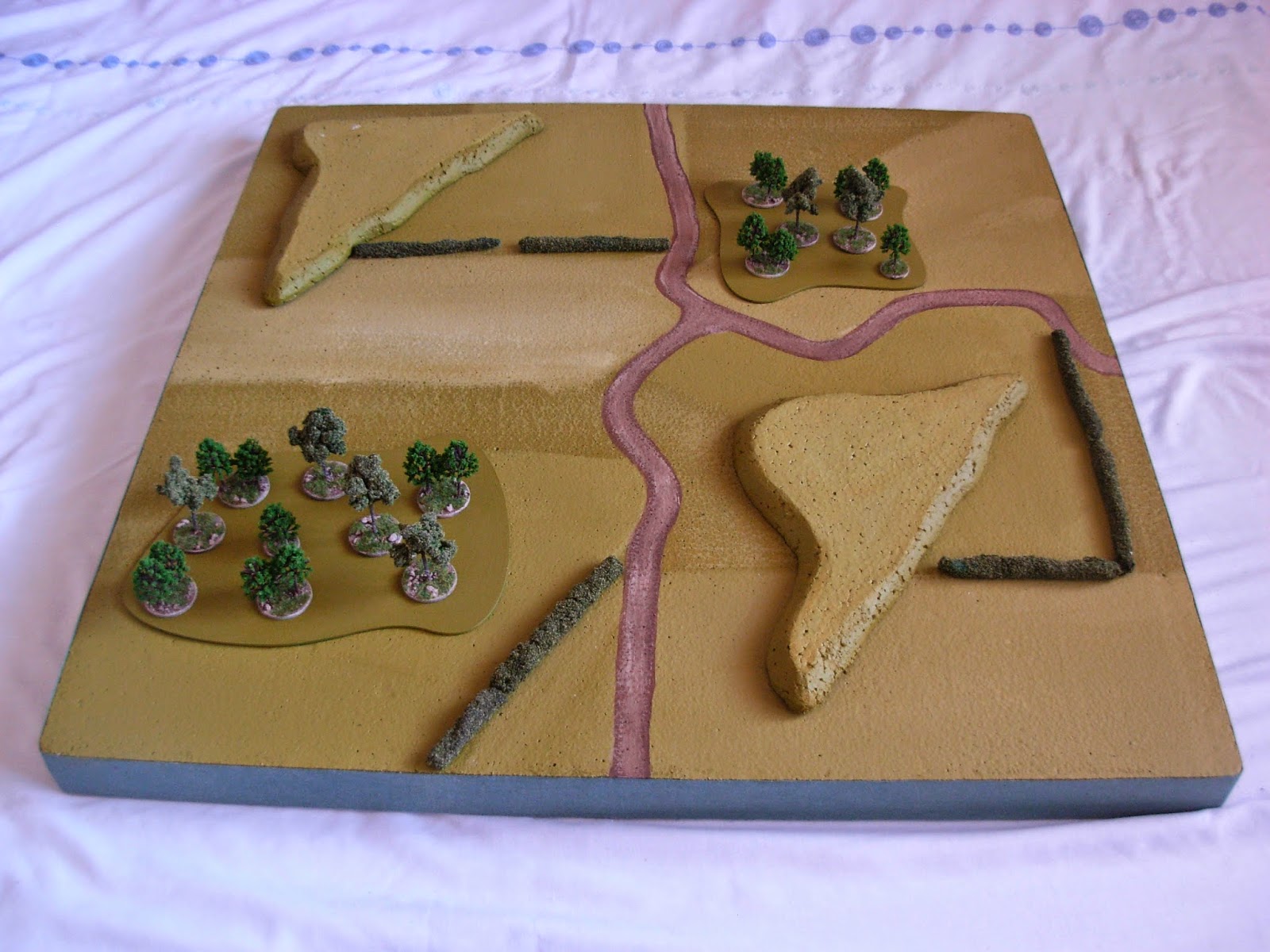 I have made a couple of small hills, and painted up some MDF templates to use for my woods, put together with my other stuff im thinking they look ok. I must remember to put a piece of paper in between the hills though, as the heat over here is making them stick together, hence the bits of damage on the tops of the hills.... 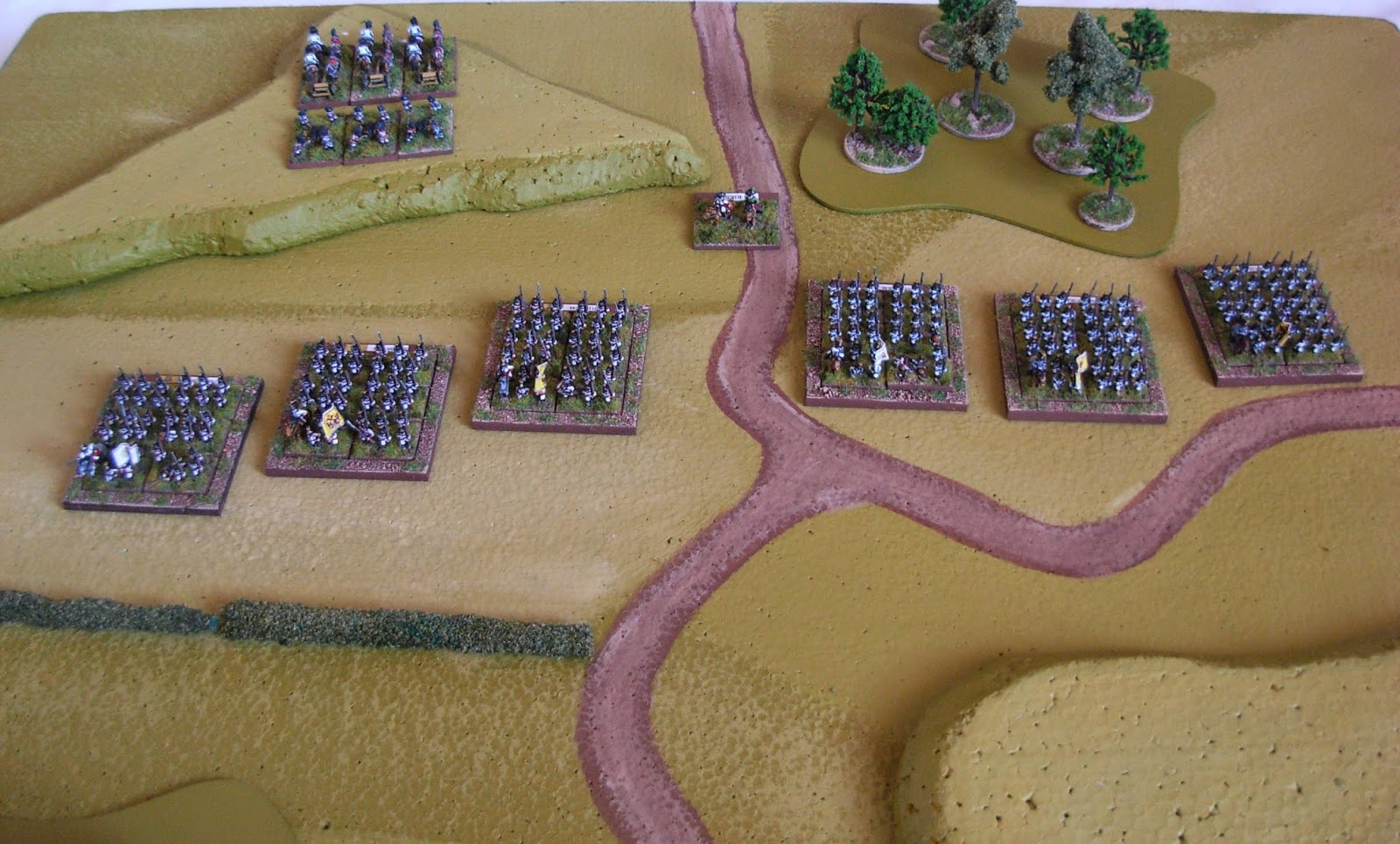 Here is an Austrian Infantry brigade, complete with supporting position battery, in their new movement trays, with the Artillery taking advantage of the new hill. 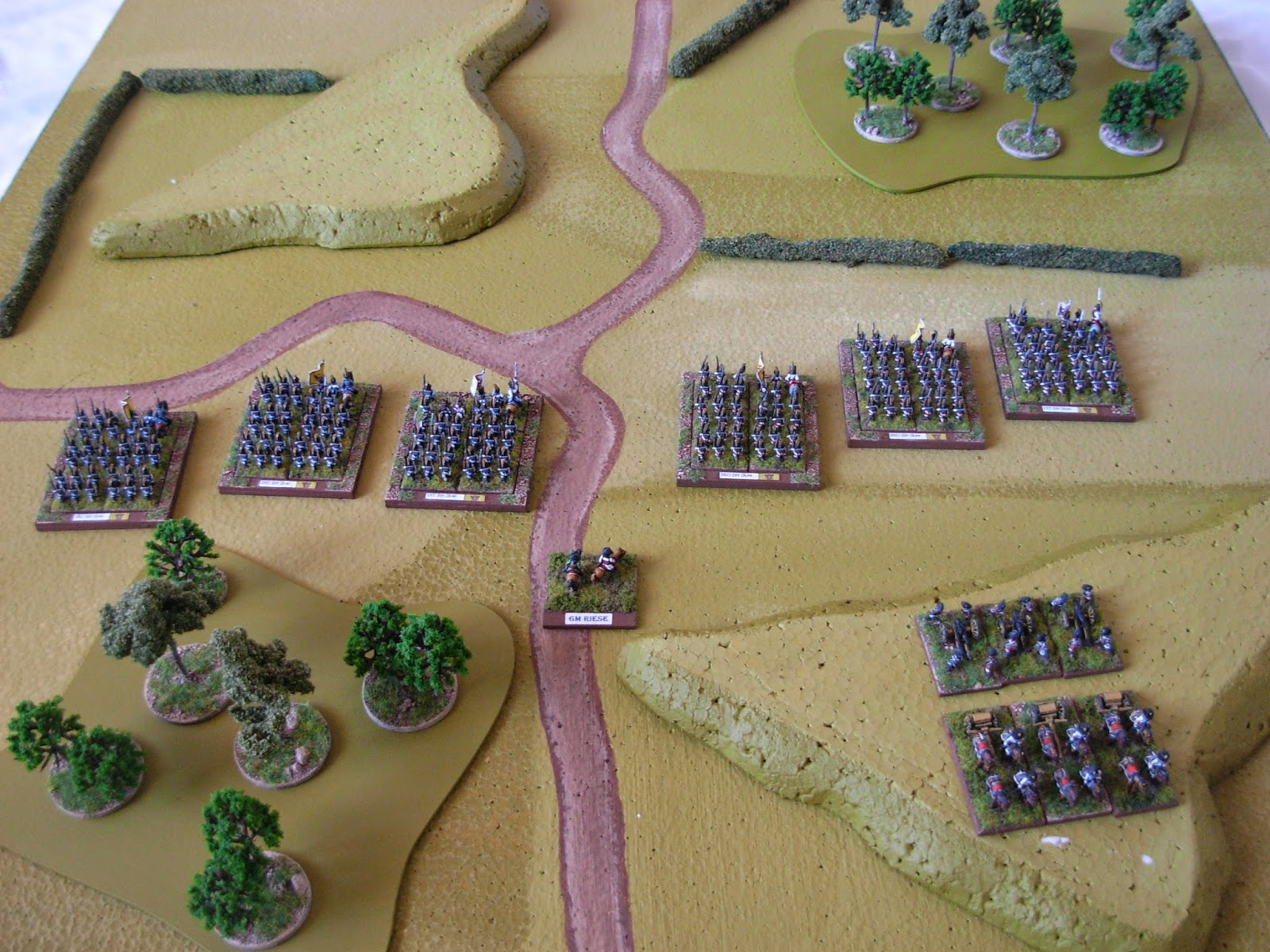 The Brigade from the rear showing all the units labels, and annoyingly, the heat damage on the hill... 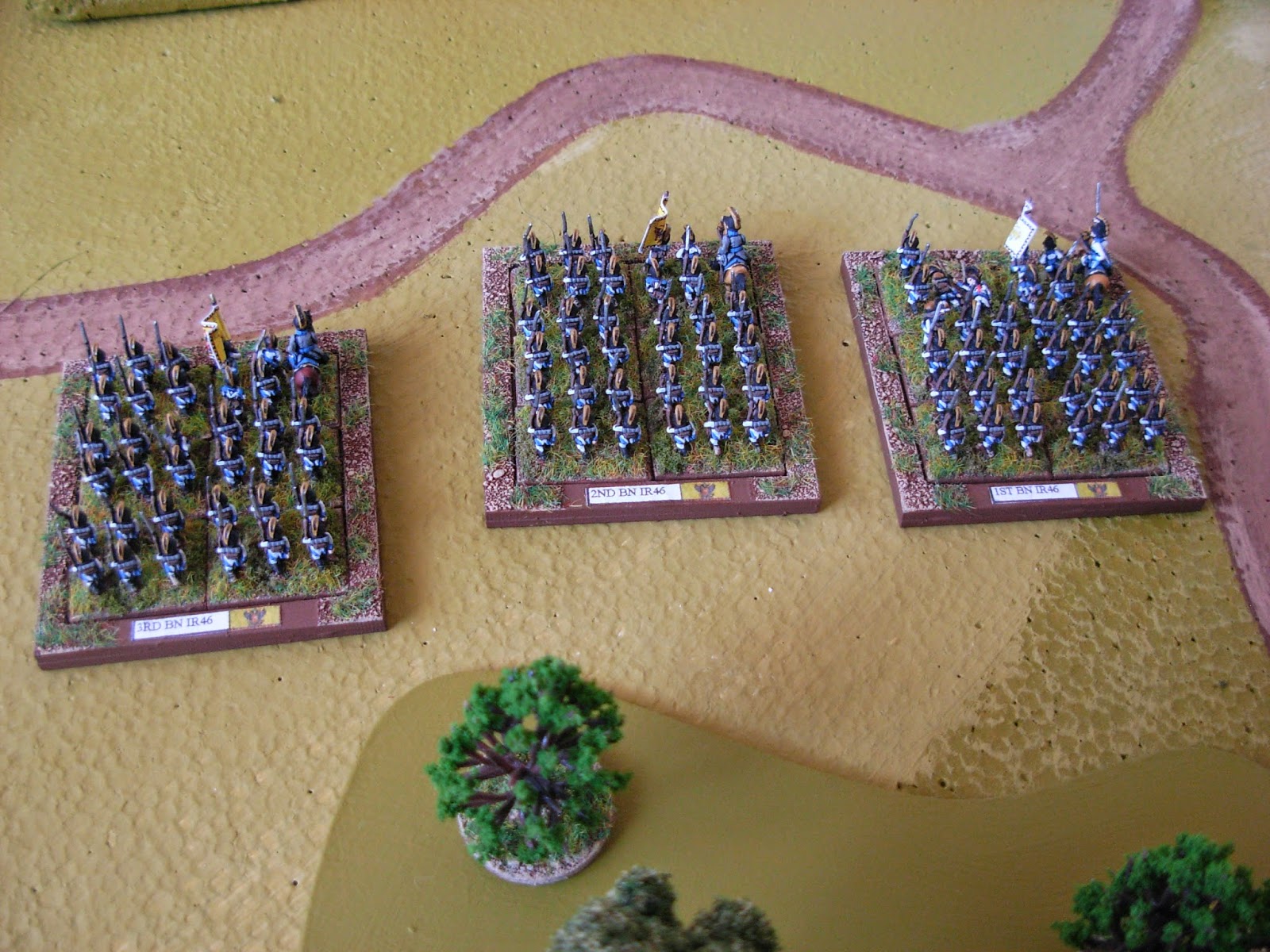 Close up or Infantry Regiment 46, in Battalion masse, holding an important road junction.

Ive been continuing with the Epic stuff as well, the Novamarines are nearing completion, finally. 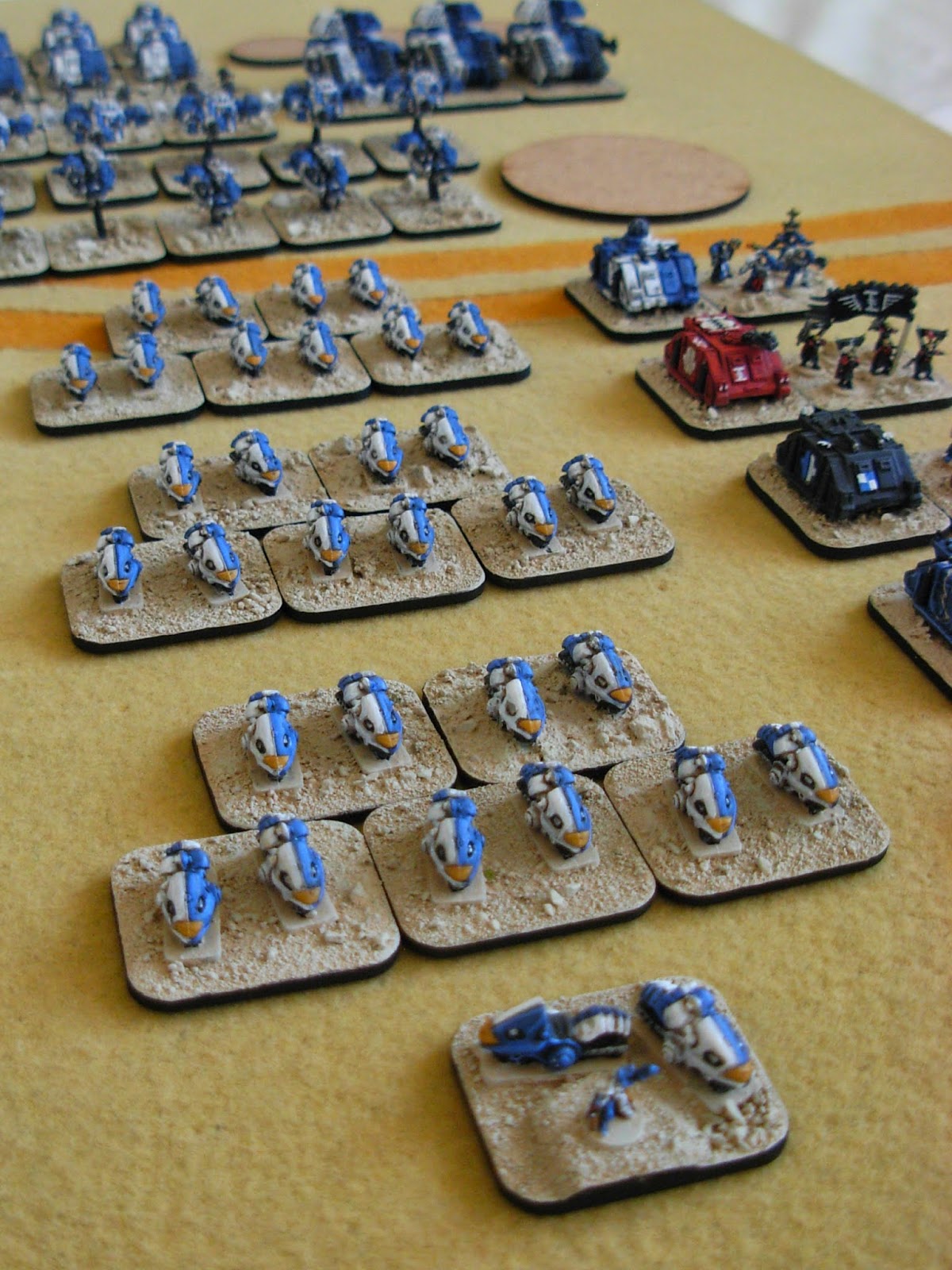 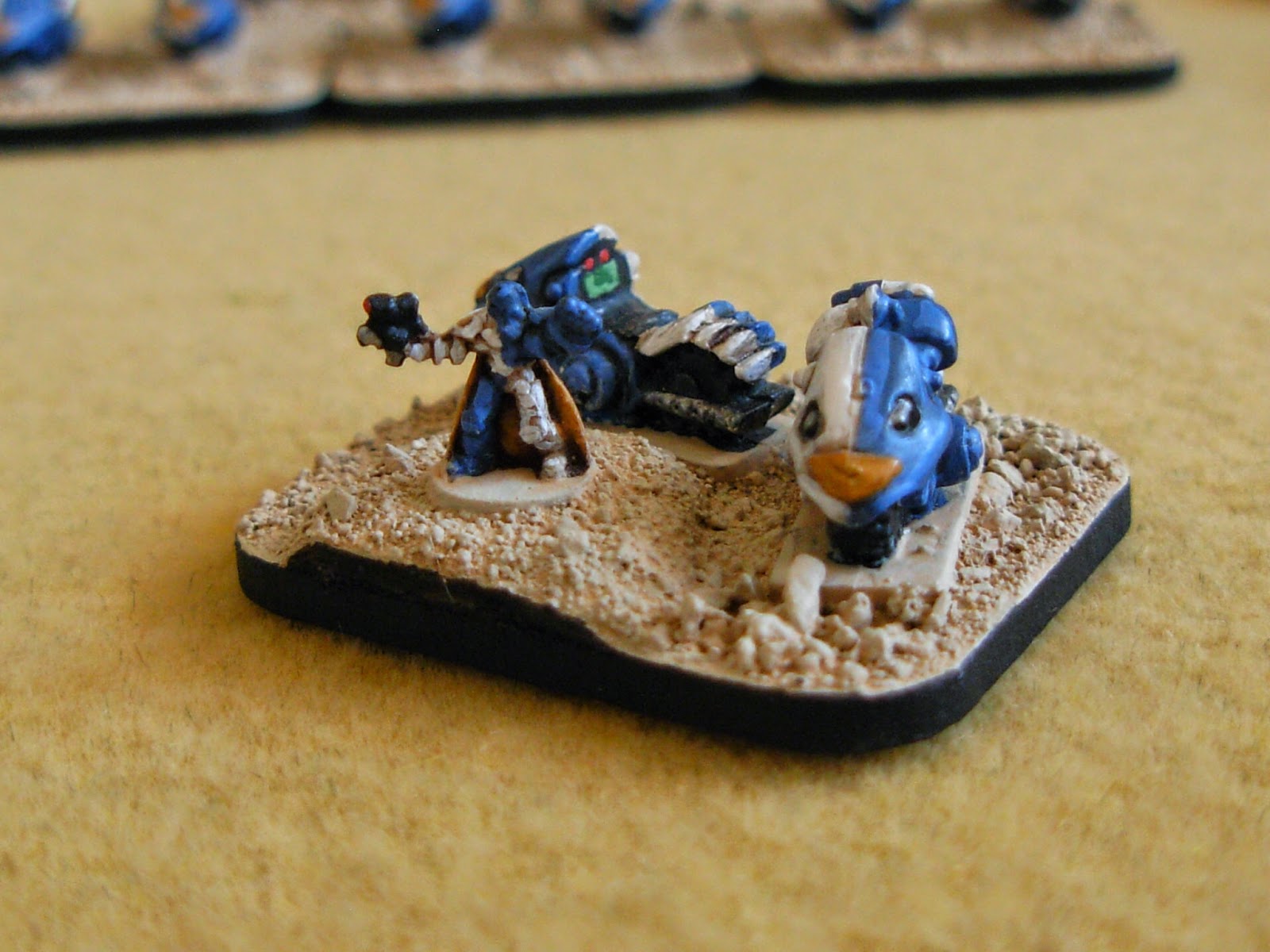 Bike company, 3 detachments of bikes and a bike mounted commander. The Commander is a conversion as is the bike itself. 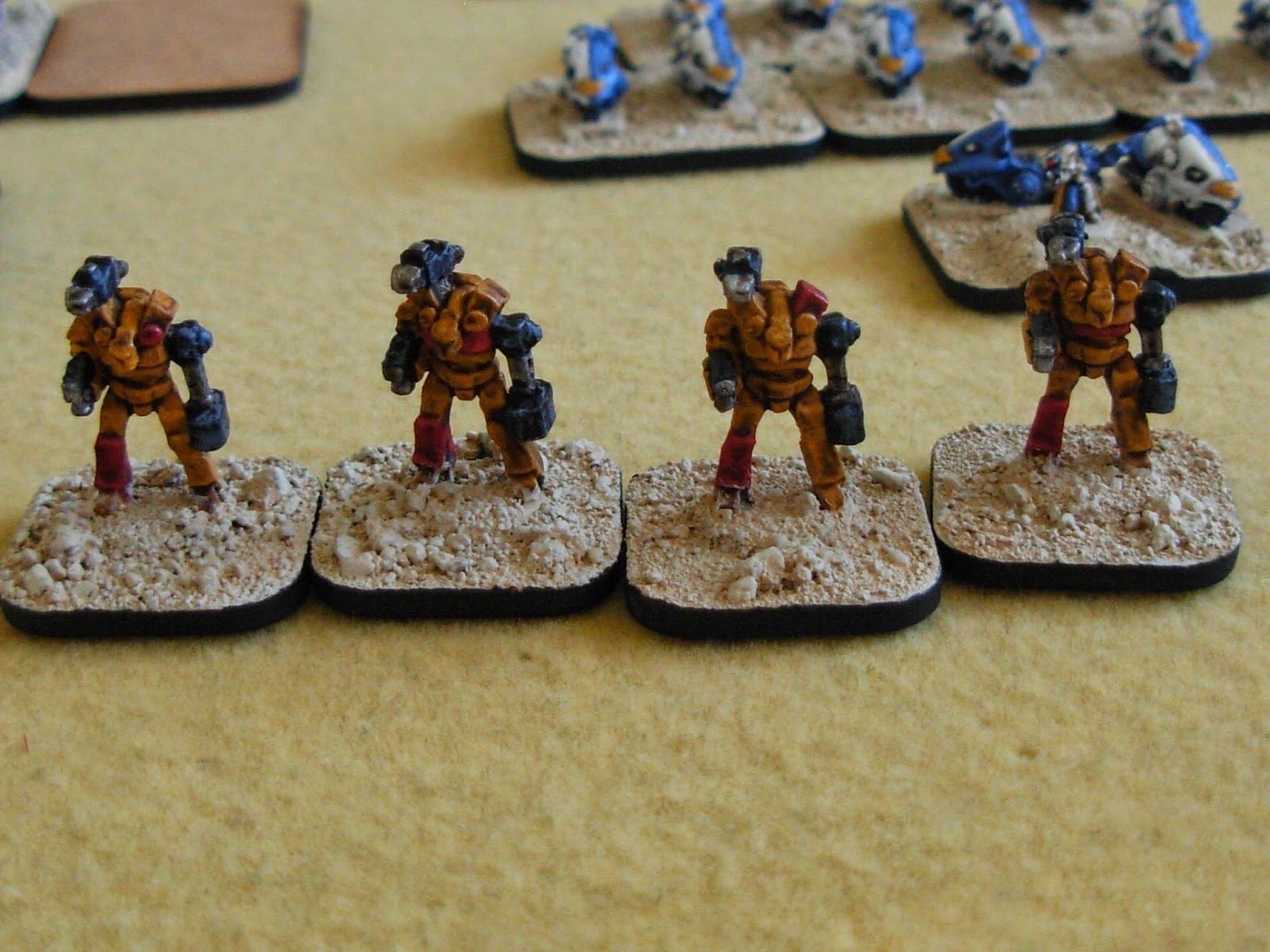 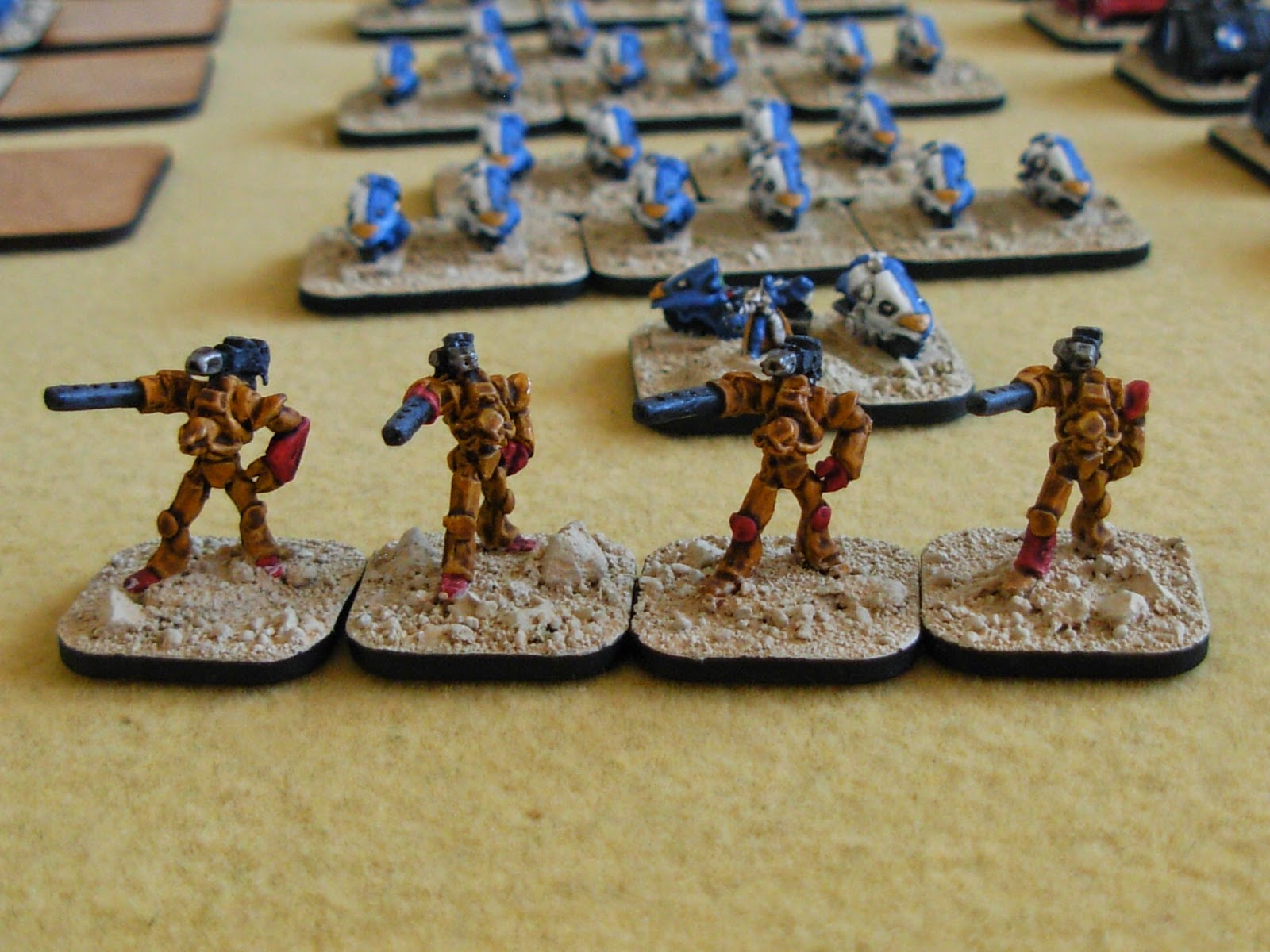 2 Units of Imperial Robots. I had to have them in a different colour scheme, as the blue and white is getting tedious!

I have also painted up a test base for my Tau force... 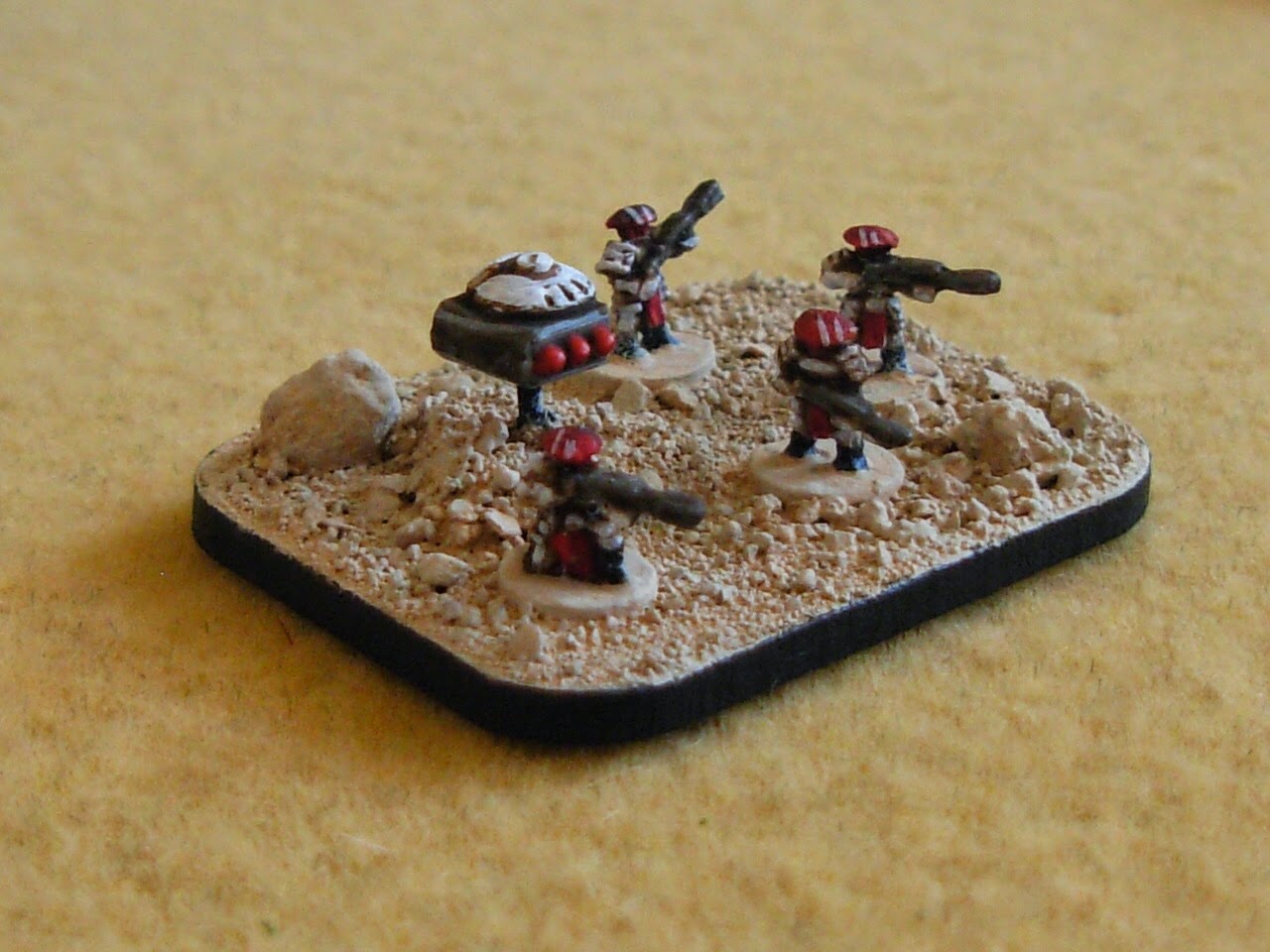 Bloody difficult to paint, these figures are tiny, and have loads of detail...

Thats about it for now,
Cheers for looking,
Steve.
Posted by Stig of the Dump at 12:19 11 comments:

More Mayhem, and a bit of EPIC too.

Ive had another busy month so far, but ive managed to find some free time to get 4 units of half orc archers done for my Mayhem / KOW 10mm army. 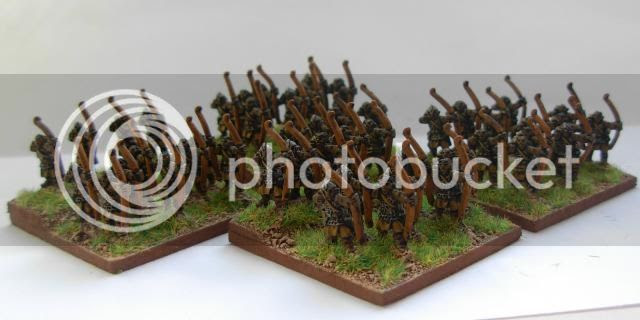 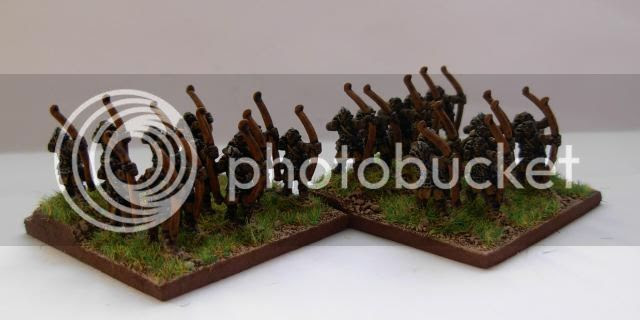 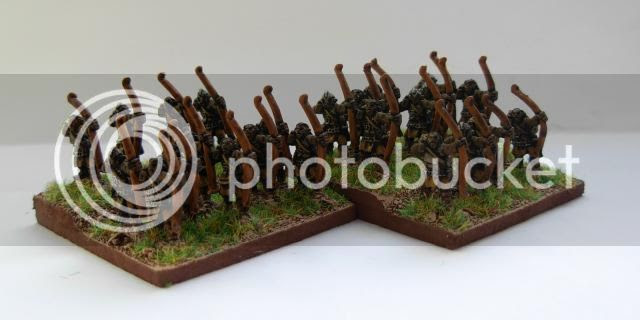 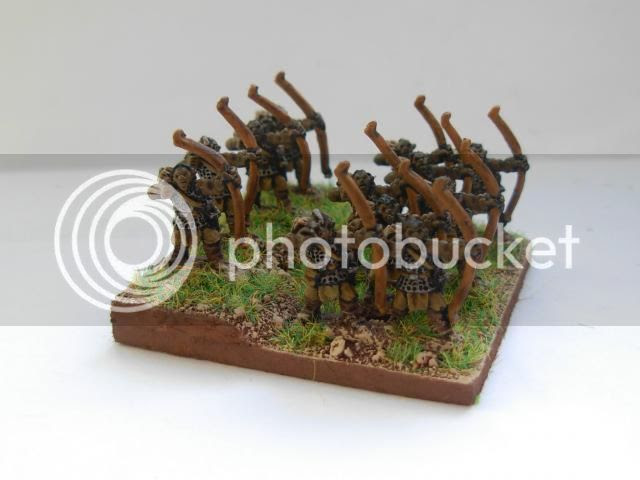 Heres a close up of one of the units. I have had a go at a bit of multilevel basing in an attempt to make the bases slightly more interesting, and to use up some of the old bases from earlier rebasing shenanigans.

Next for the 10mm Fantasy stuff will be some Humans, once they are done ill be putting in another order to Copplestone for some cavalry, wolf riders and characters.

I have also started painting my Epic scale Novamarines again, I have so may of them I think ill be painting them for ever! 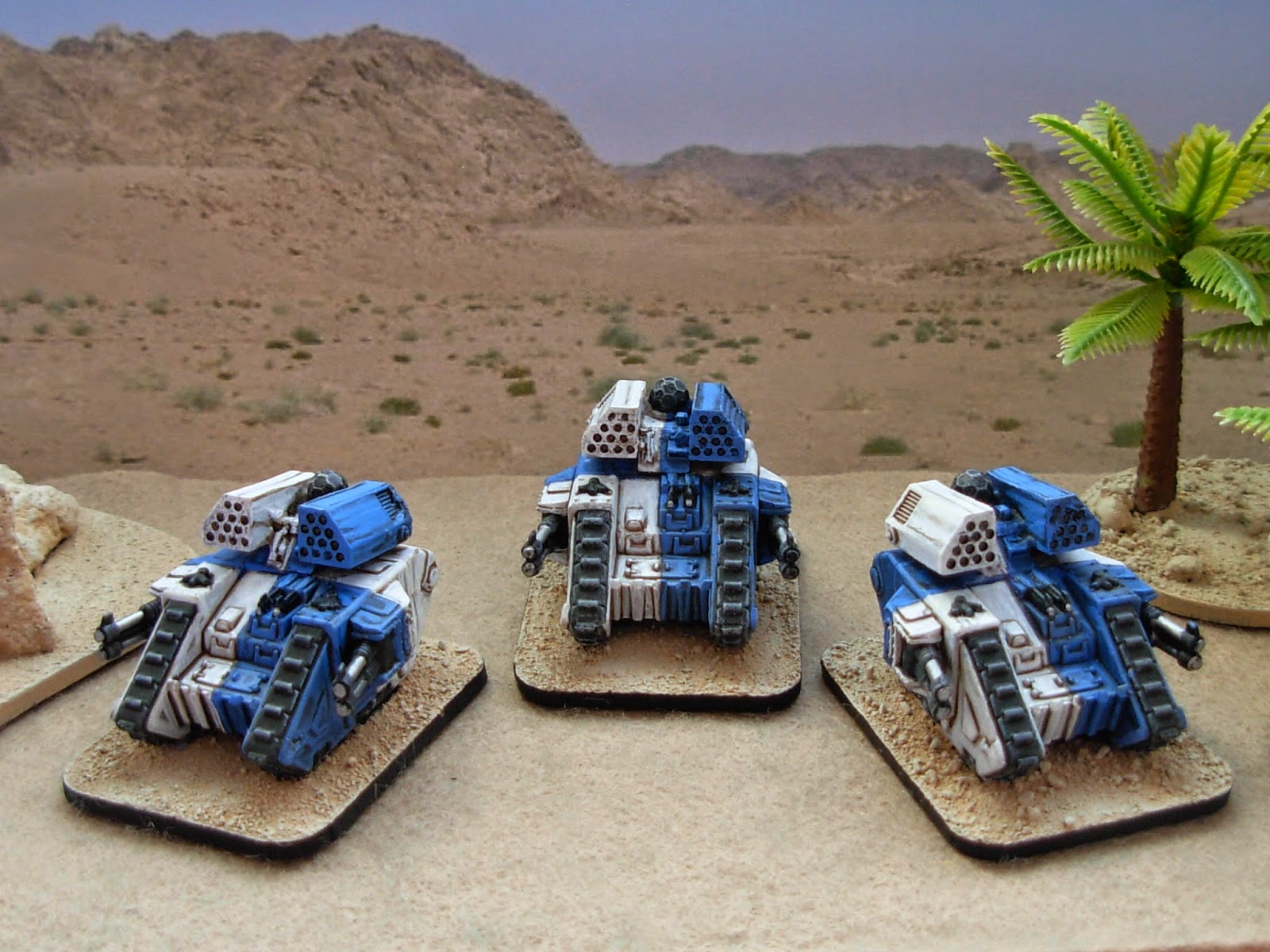 Here we have some landraider Helios. I have made these myself using missile turrets from steel crown productions, they should provide the landraider company some fire support! 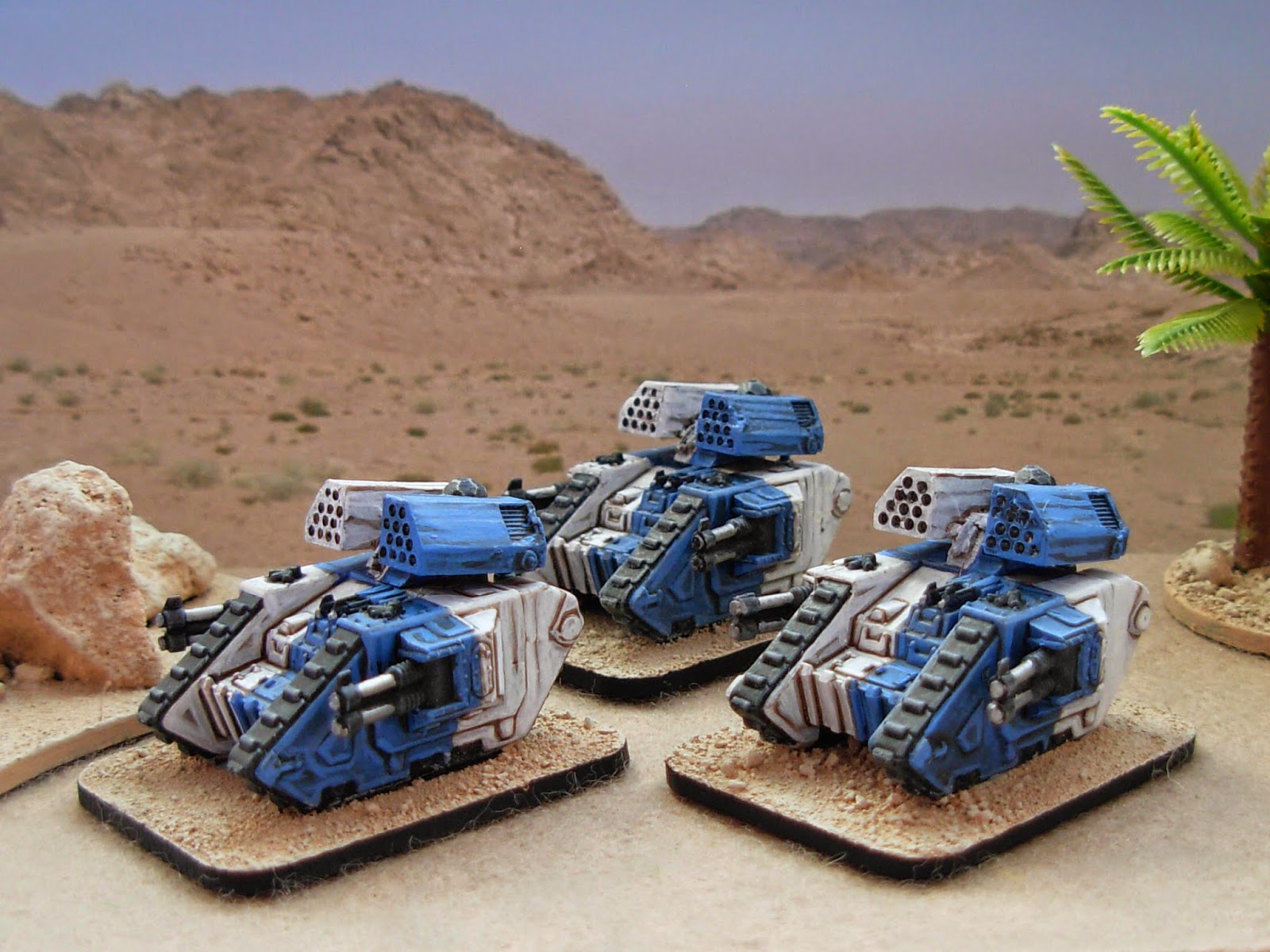 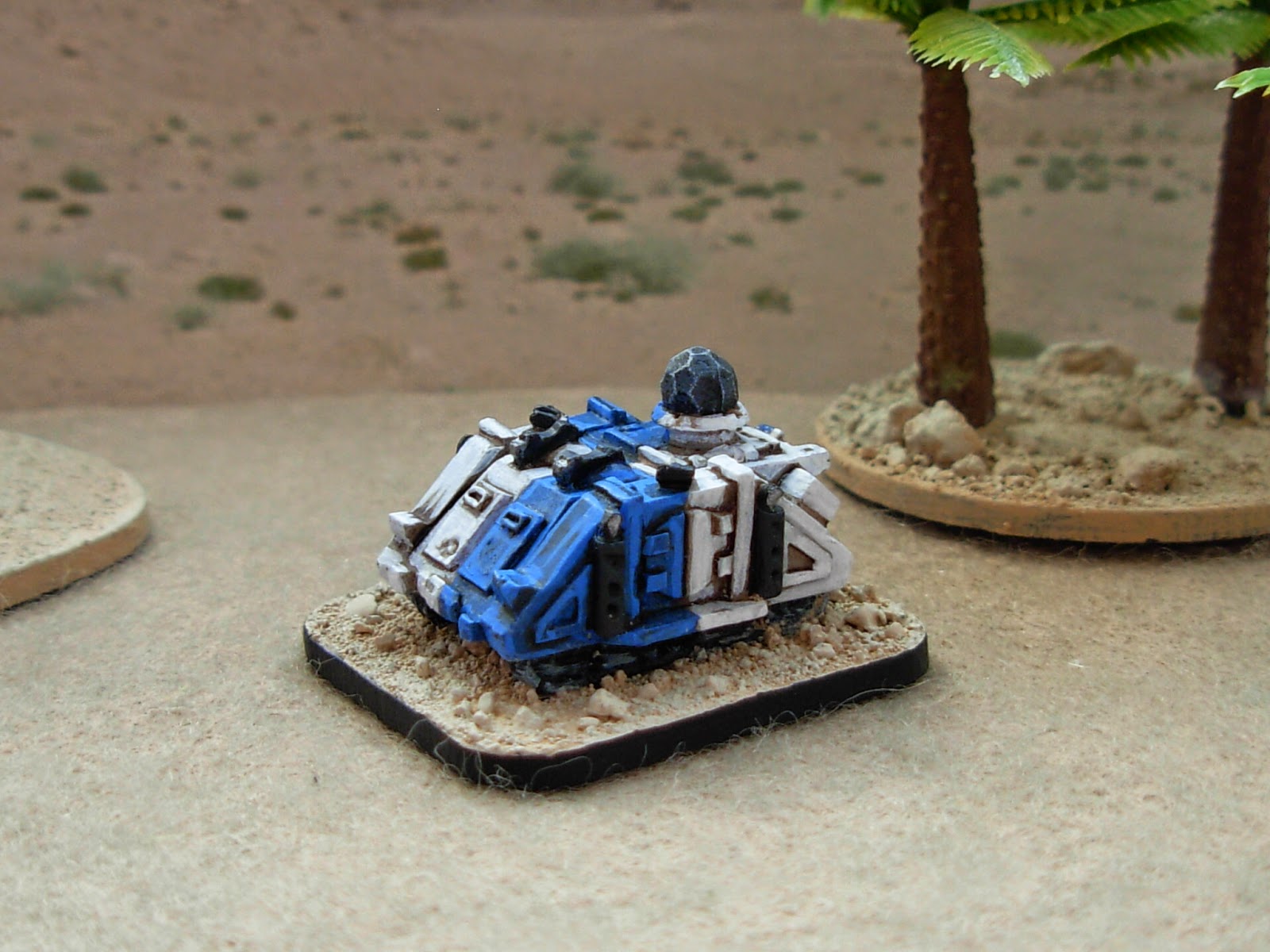 This is a really old (vintage even!) metal multipart Rhino APC that I converted into a command varient using a comms pod from steel crown productions (SCP).

I really like the older Epic stuff, it reminds me of my youth..... 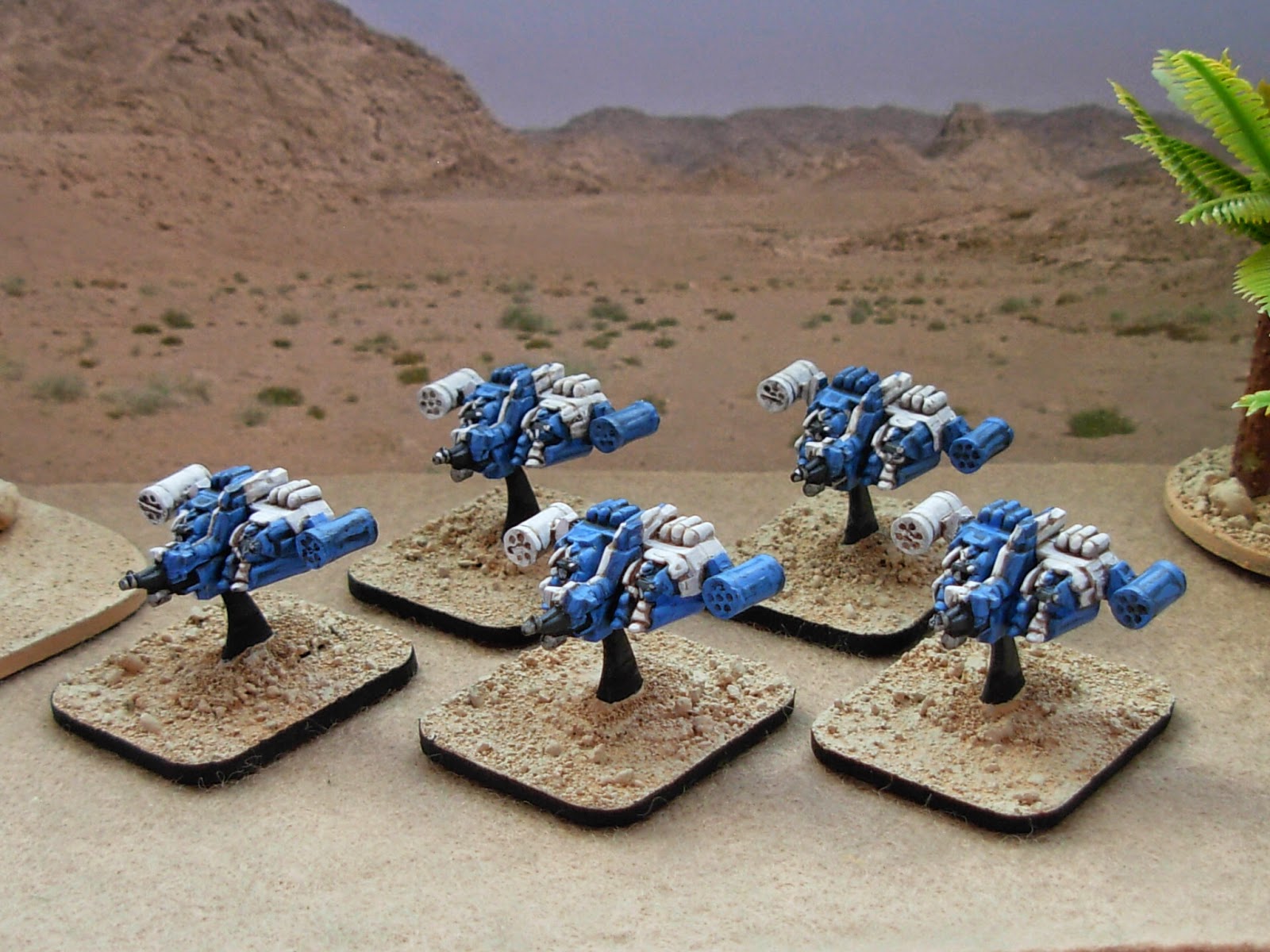 And finally, here are my converted land speeder typhoons,armed with missile pods, yep you guessed it, from SCP. My growing Epic collection can be seen in all its (small) Glory here EPIC PAGE

Thats it for now,
Cheers
Steve
Posted by Stig of the Dump at 17:28 1 comment:

Well, nearly a month without an update on the blog! I have had a pretty crap month if truth be told, the worst 2 weeks ever back in the UK when on leave, followed by a crap 2 weeks at work, all told its been pretty rubbish.

Anyway, I have been doing a bit of painting, and after dithering for ages about the best way to base the fantasy stuff up ive finally settled on 40mm squares for standard size units. Nice and small, as storage is becoming a problem, plus it means I dont have to paint (and buy) quite so many figures. 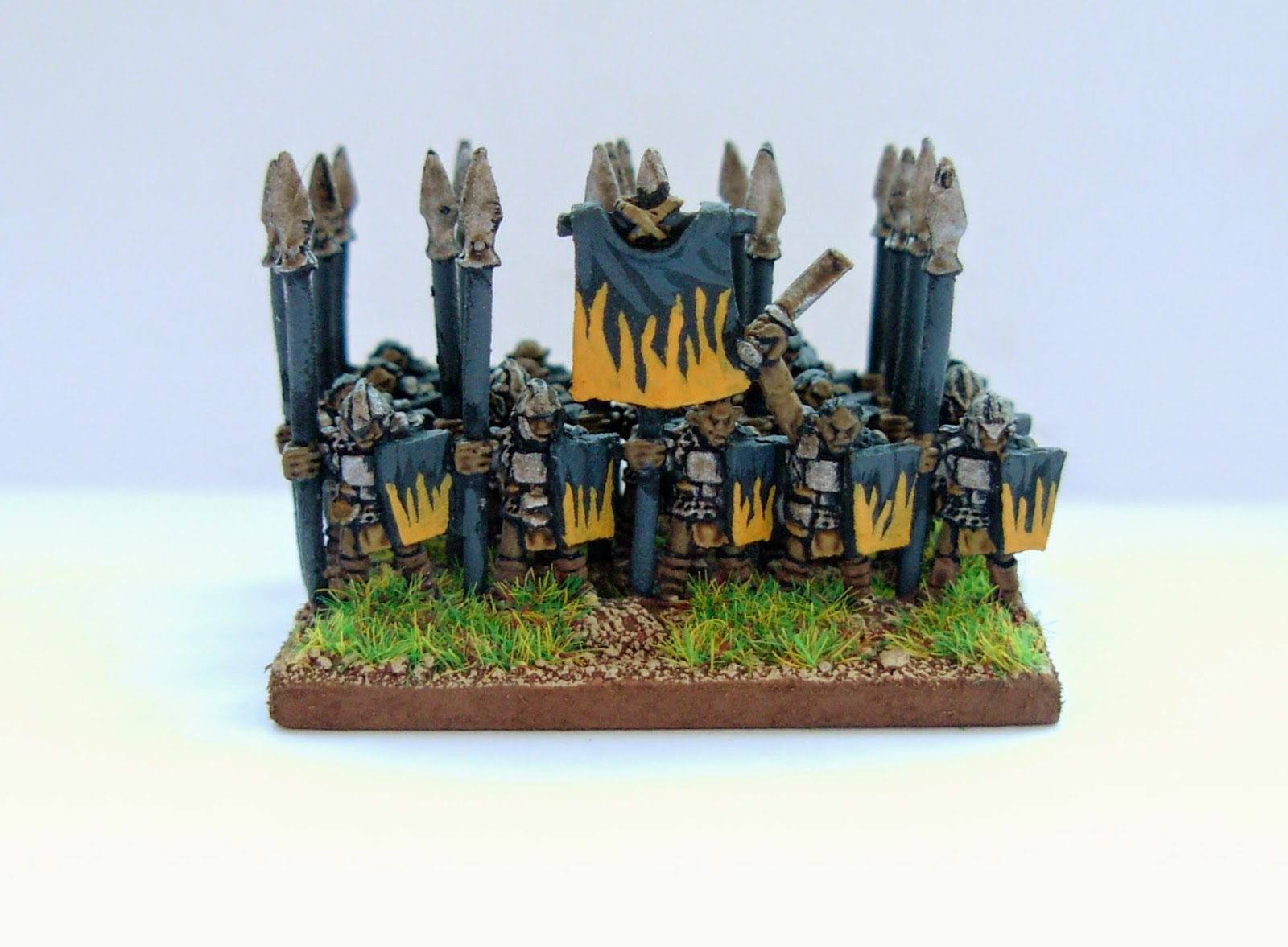 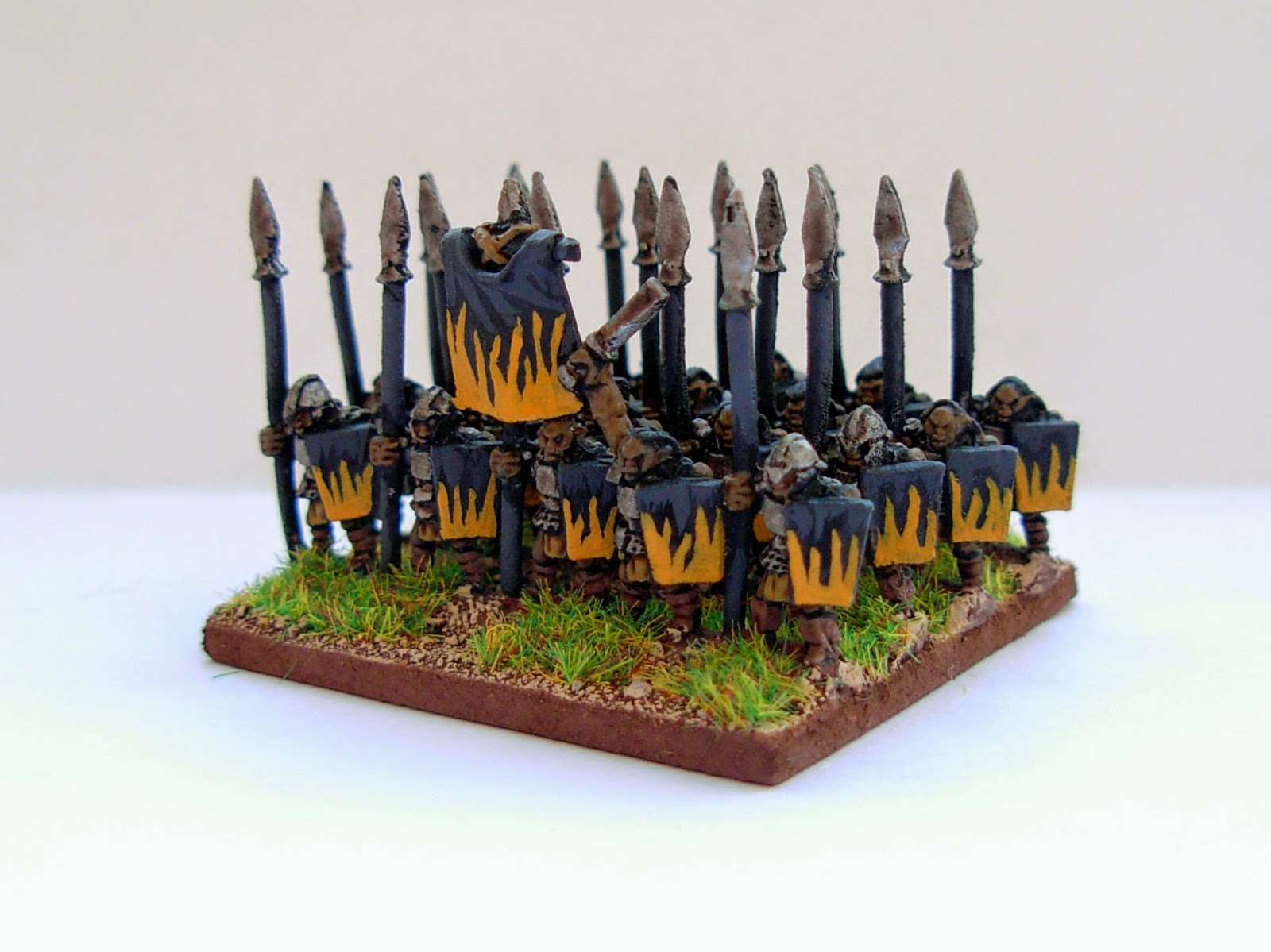 These are 10mm Copplestone castings half orcs. I was very tempted to paint them as Uruk Hai with the white hand on their shields and banner, but in the end I wanted to make them my own. So yellow flames it is!

These will form the backbone of the evil army, with their long spears and iron discipline.

I have 1 more unit of these to do, then 4 units of half orc longbowmen. 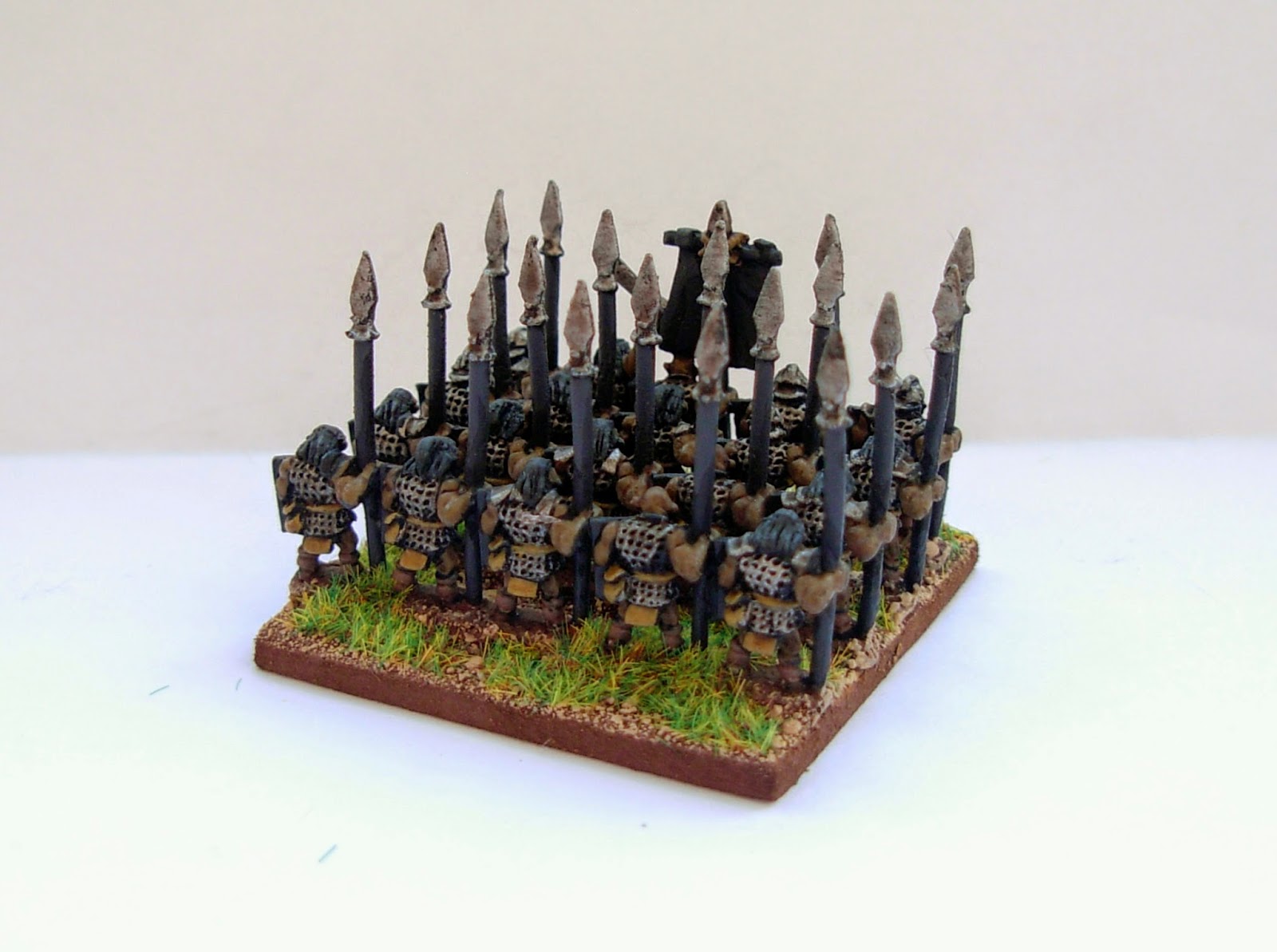 The Orcs will be based on an 80mm frontage and will be classed as a horde, basically an undisciplined rabble! 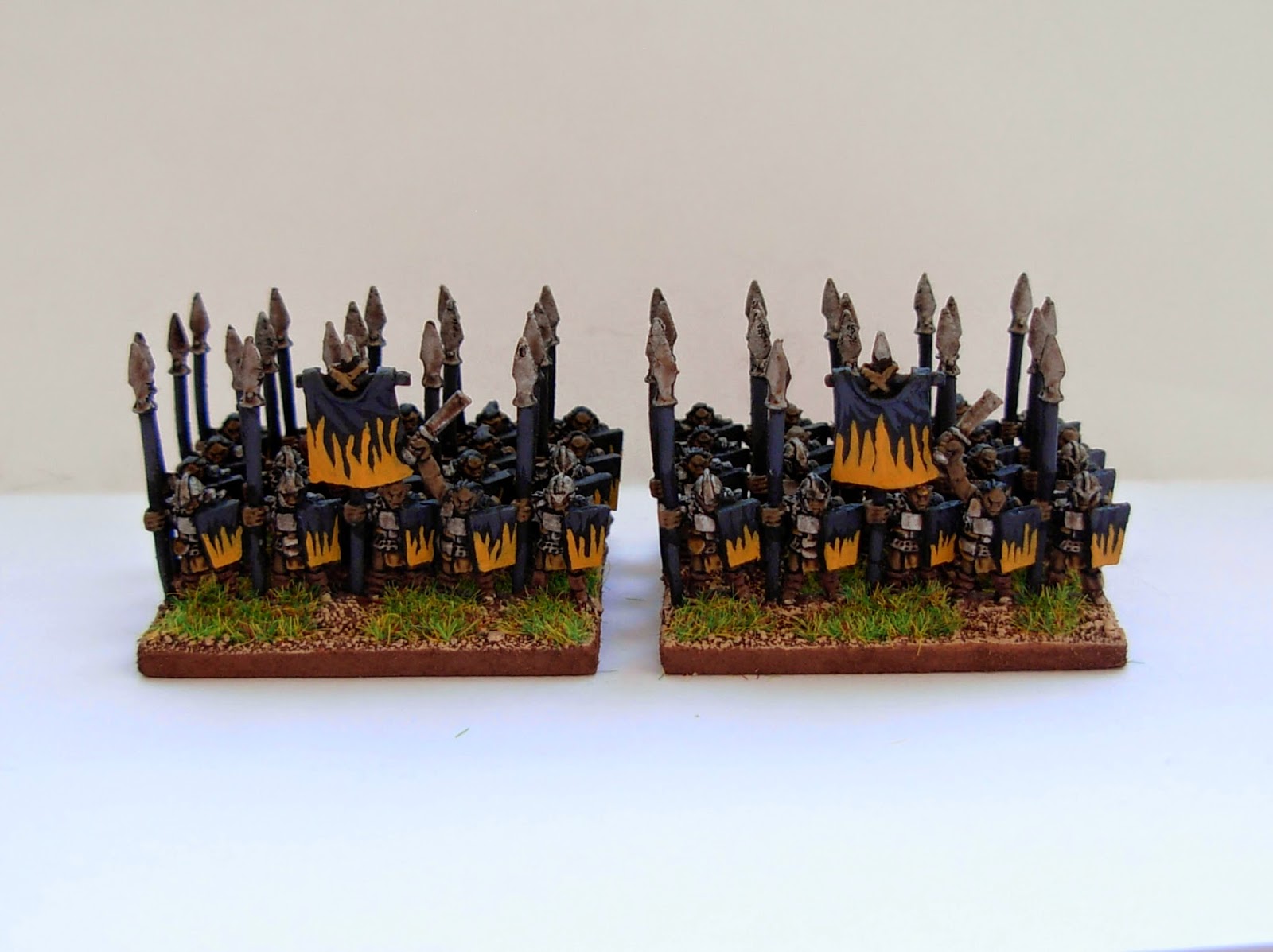 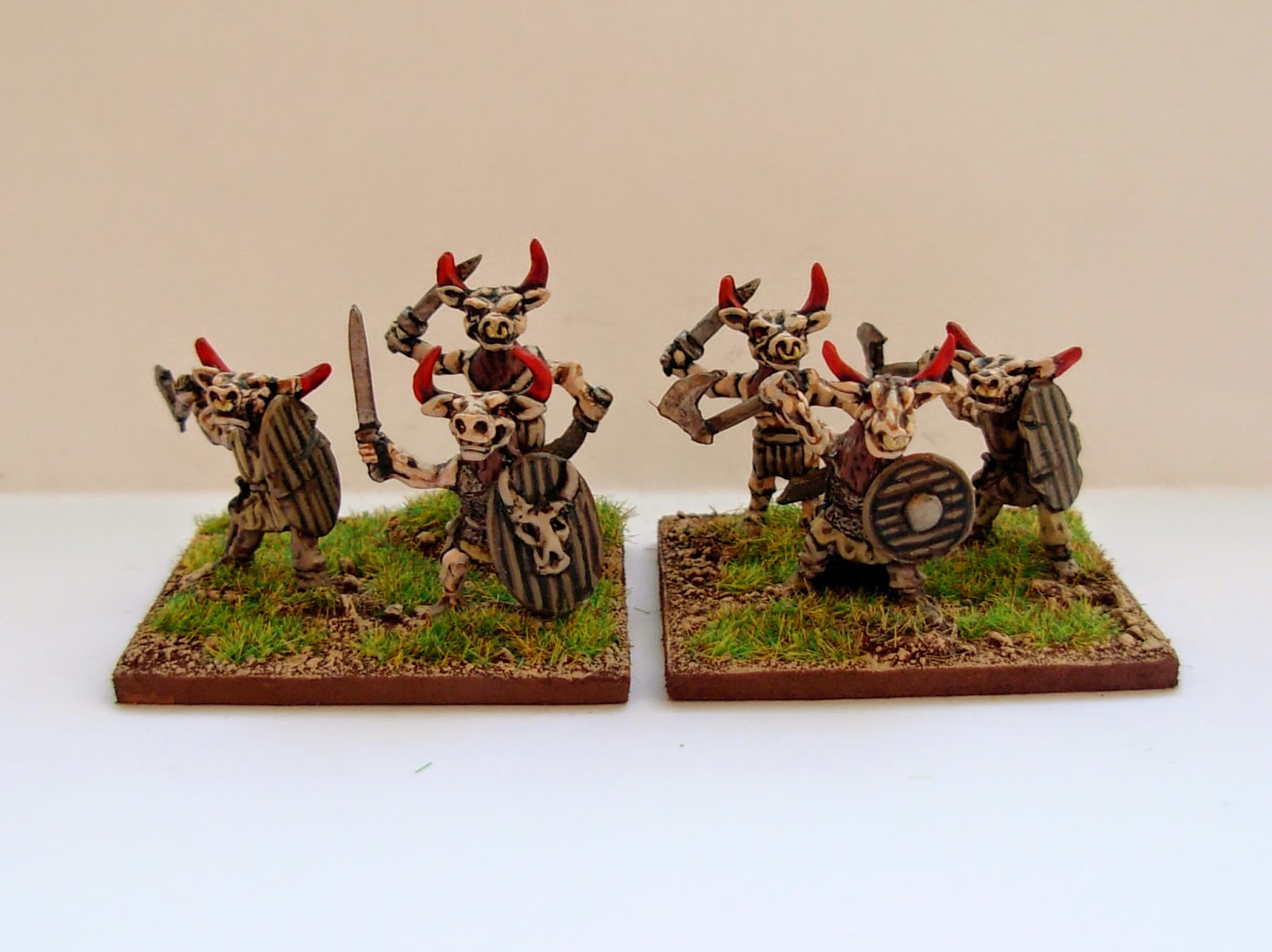 These are some 15mm scale minotaurs that I have had in my bits box for years. Im not sure what make they are, but I think I got them free from somewhere...?

Anyway, I thought that I may as well use them in the evil army, I think they have painted up reasonably well, they were not the best sculpts to begin with, and the ankles on 2 of them snapped and had to be repaired with brass rod and green stuff.... I also filed the designs off some of the shields and tried to make them look a bit more battered 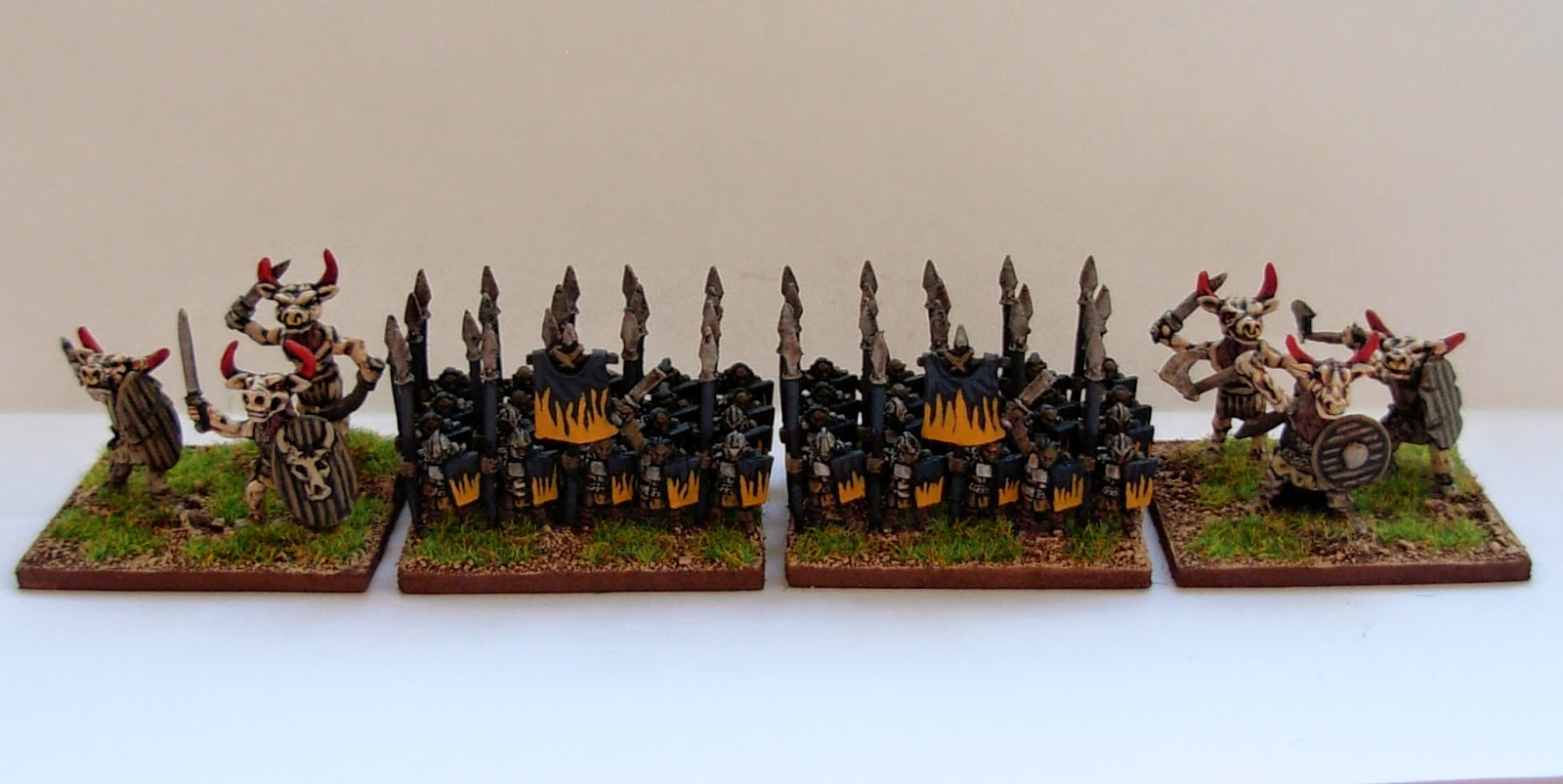 The army of evil so far!