I promised myself I would crack on and finish the stuff I have got already, and to be fair I have completed my Persians, Waffen SS, German Grenadiers and Soviets this year already. I have painted up quite alot of the 6mm Napoleonics, and loads of epic 40k stuff too.

So the new project, something completely different for me, and suggested by both of my sons. Fantasy. Yep you read it right, Fantasy. Now, 28mm is far to mainstream for me, and if im going to do mass battles, then its got to be smaller.

The rules to be used will be Kings of War by Mantic Games initially.

I have the free A5 copy of the rulebook, and its a very simple game, perfect for gaming with the lads. Thats not to say its an easy game to master, just that its not rules heavy. 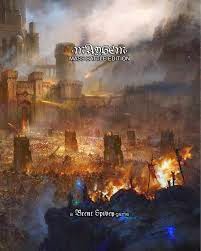 But I have also just ordered Mayhem by bombshell games.
I cant really comment on this one yet, but all the review ive read so far have been very positive.

The other option is of course Basic Impetus Fantasy, which will be getting tried out too.

Im looking forward to painting something different, and hopefully getting my sons interested in something other than computer games.... I dont hold that much hope but hey, its worth a try.