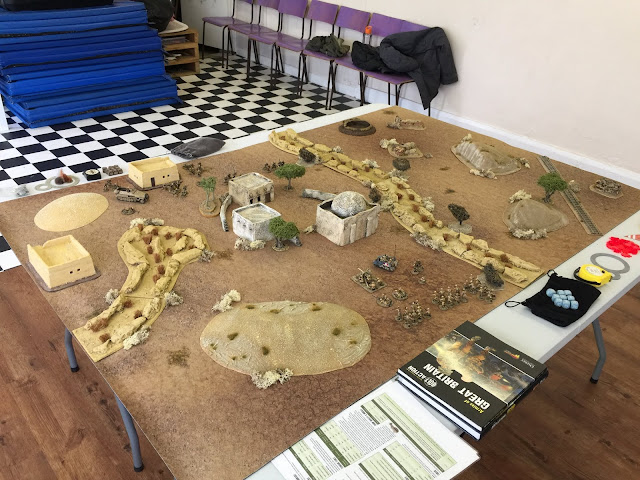 We recently played our first game of Bolt Action V2 at the Old Guard wargames club. We played a test game at around 600 points per side.

Set in North Africa in 1942, the British forces of the 8th army took on Rommels Afrika korps. I wont go into too much detail here as I have forgotten what happened when etc, but..... 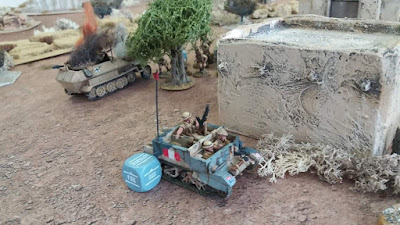 The only problem we really encountered was the difficulty in taking on vehicles. It seemed that you really had to be very lucky to damage one, and we beside trying to take one out in close combat. I managed to destroy the SDKFZ251c in the end but it was a lucky shot and only after trying for turn after turn. My Bren carrier was a terror on the battlefield zipping about and machine gunning anyone foolish enough to be caught in its line of sight..... very frustrating for my opponent.... 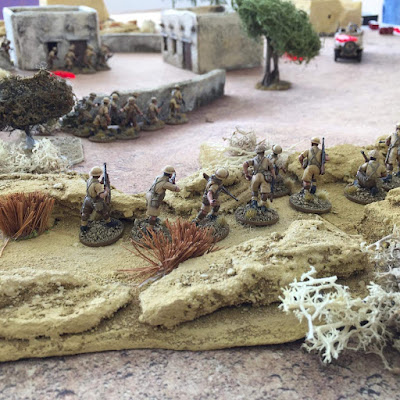 Overall we really enjoyed the game, the dice activation meant that both players are constantly active and engaged in the game. The rules are simple enough to pick up fairly quickly but have enough depth to make for an interesting game, while not massively historical, still great fun. 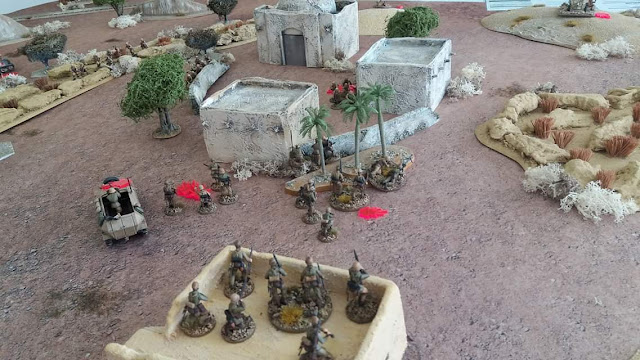 Bolt action is certainly a game we will be playing more of in the future, hopefully the club will get on board and it will become a club joint effort, who knows we may put on a display game at some of the northern games shows..... 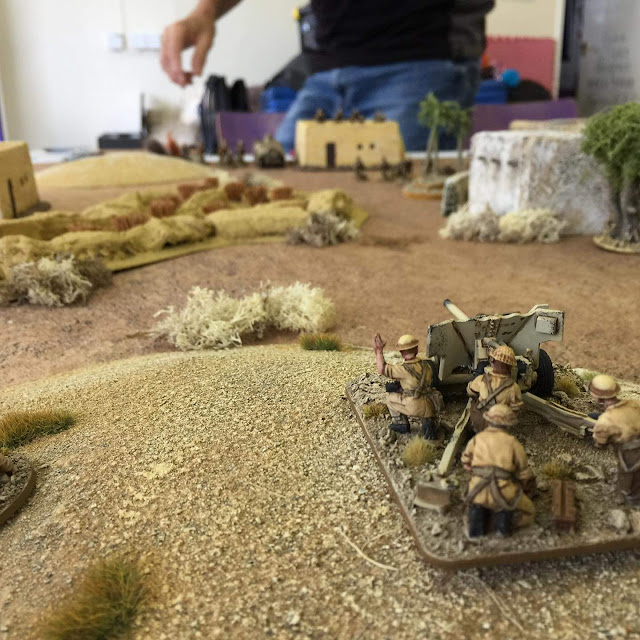 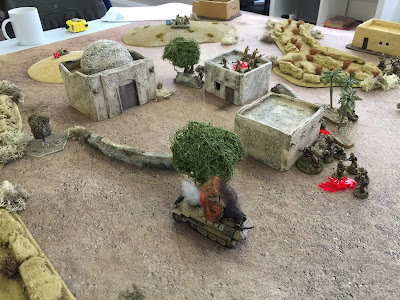 Thanks for taking a look,
Cheers,
Stig.
Posted by Stig of the Dump at 16:20 2 comments:

The Luna Crusaders take on the slippery Alpha Legion.

My primaris chapter,  the Luna Crusaders are in desperate battle once again. This time they take on the Treacherous Alpha Legion. 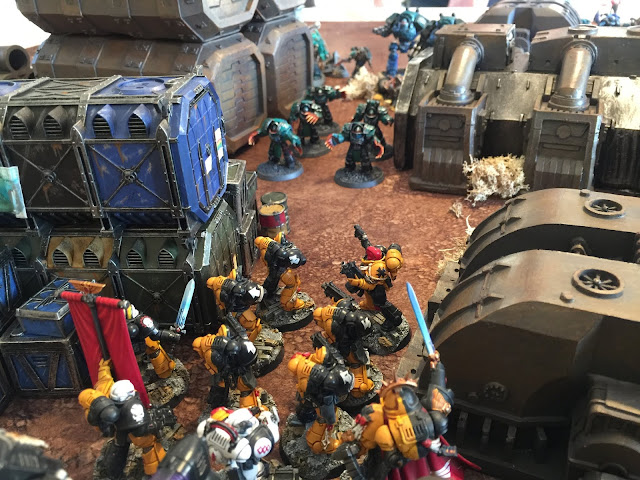 Check out redtoofs blog for a battle report! Luna Crusaders vs Alpha Legion

Unfortunately I accidentally deleted my earlier post on my bolt action project, the hazards of touch screen tablets.... or just being a numpty.

At the Old Guard wargames club, we have mostly decided to do bolt action in the western desert, zooming in and looking at the battle of Gazala.  With 8 club members getting involved already it may well be a demo/display game in the future.

My contribution will be a reinforced platoon of the 4th East Yorkshire Regiment, part of 150 brigade.

Heres what I've got done so far. 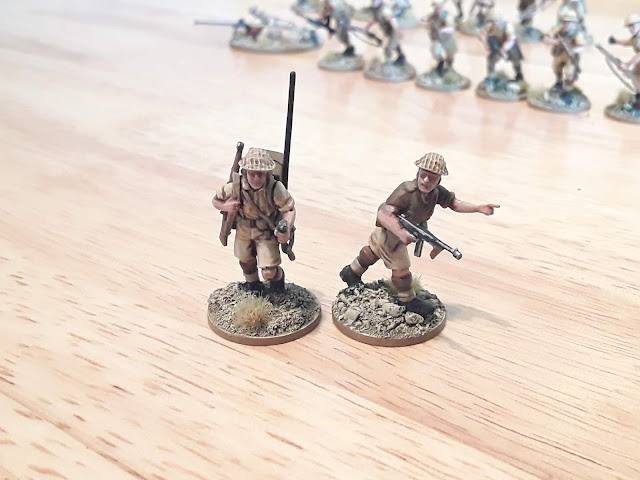 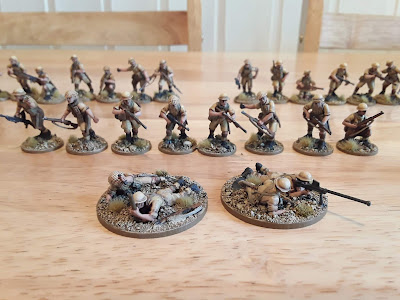 I also have an artillery observer team and a senior officer. 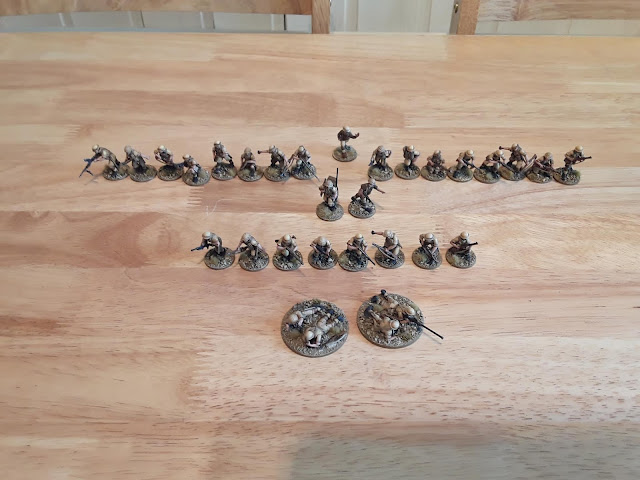 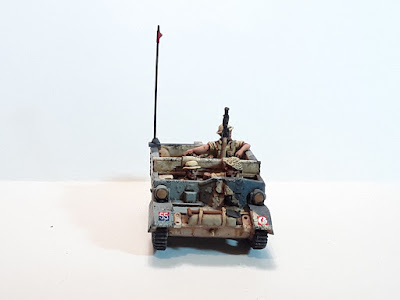 I've painted this in the earlier caunter camouflage scheme.

Its marked up as belonging to th anti tank regiment (artillery).

It will be used to tow my 6 pounder Anti tank gun. 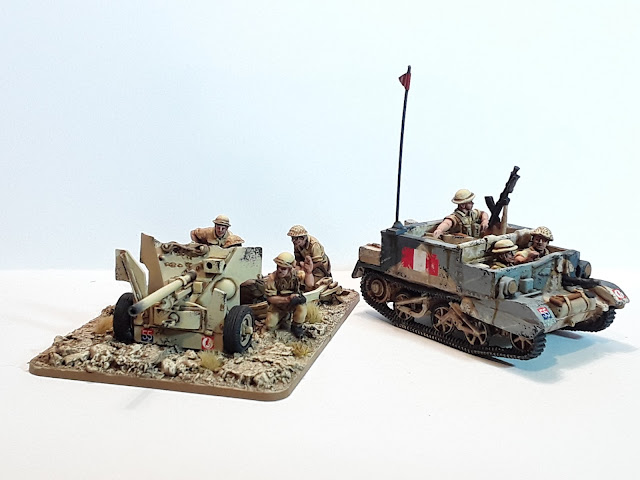 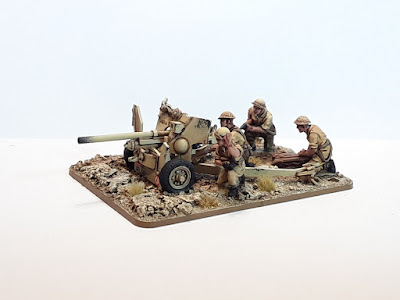 I have taken a bit of artistic licence with the markings on the 6 pounder.

I'm not sure if the guns were marked up in this way in the desert, but rule of cool won. 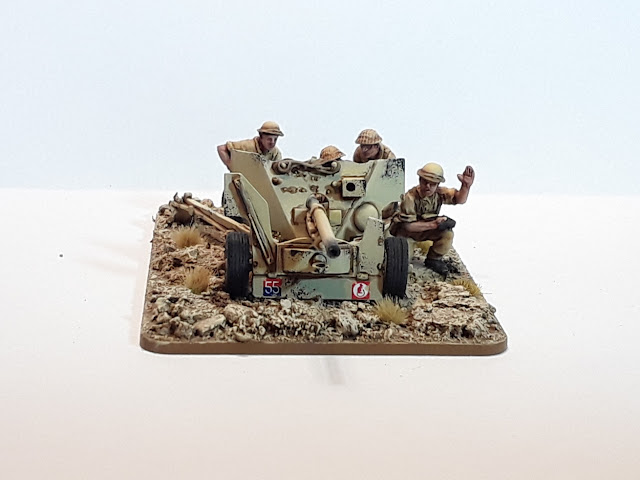 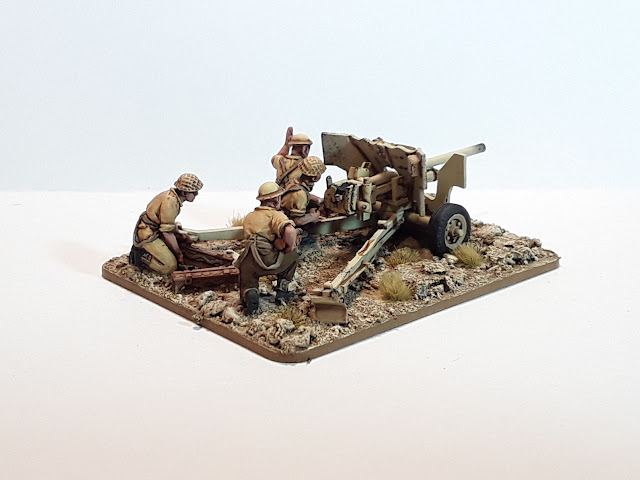 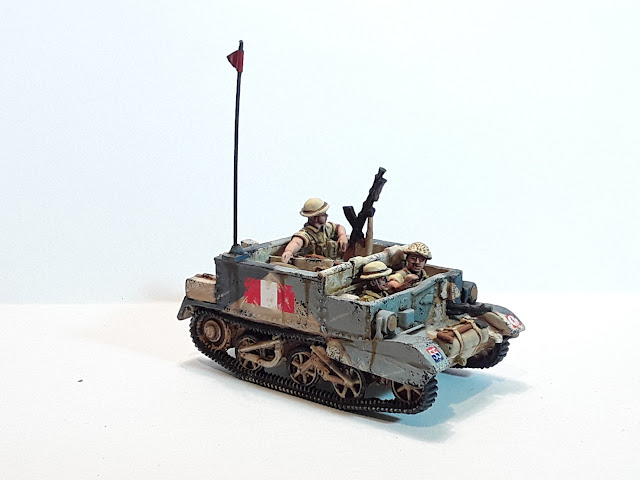 That it for now, thanks for having a look.

The Luna Crusaders in action again. 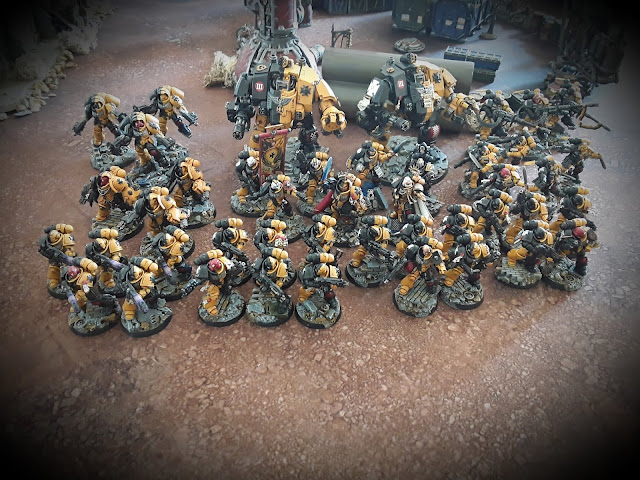 My homebrew chapter, the Luna crusaders take to the field once again, this time the battle brothers of the 3rd crusade group launch a pinpoint strike against the foul xenos, a genestealers cult. With their primary objective secure, they are counter attacked on all sides by hordes of foul mutants and traitors.....


Can they hold on until reinforcements arrive? See the link below to find out.

I got back into #warhammer40k kind of by accident. I was innocently digging through some old boxes of miniatures, and stumbled upon my old eldar army, then my old imperial guard army. Whilst sat there contemplating my misspent youth, I thought, why not go online, and take a look.... what harm could there be?

Now I ve never stopped enjoying the background to the whole 40k universe, even whilst painting historical armies, I'd be listening to audiobooks from the black library,  such an immersive universe,  great stories, great characters. Anyway, getting back to the point....

I found a channel called striking scorpion82 on YouTube. It was just as 8th edition was being released, I sat and watched an unboxing of the core set, and a rundown of the game. And I thought it looked great.

So some digging about in my mountain of shame later, I'd found an unpainted ork starter army from a previous edition. Things escalated quite quickly from there..... 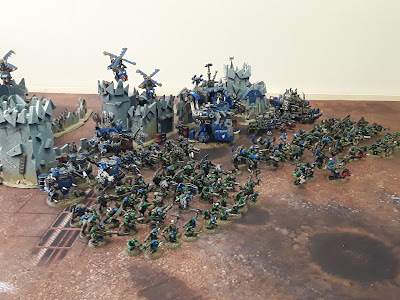 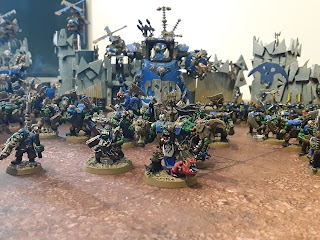 My ork army is from the Deathskulls tribe, and is led by warboss Bluetoof Irongut.

This particular xenos scumbag has amassed a sizeable force of similar cut throats and thieving gitz to his cause.

My army is now well over 2000 points and still growing. I'm not sure what it is about orks, especially in 40k, but they are so much fun not only to use on the tabletop, but also to convert, and paint. 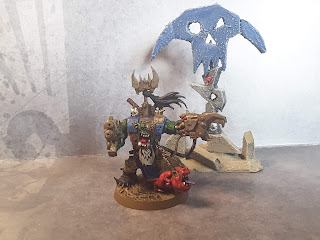 Heres Bluetoof, next to his totem pole, which I also constructed out of bits.... 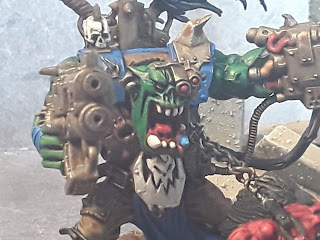 A good looking lad I'm sure you will agree. 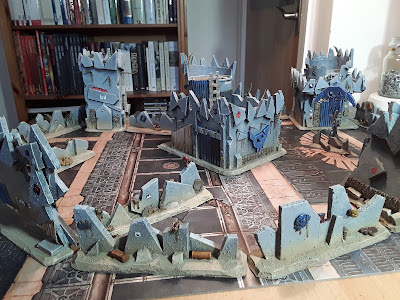 To break up the painting of the hordes, I thought it might be cool if I made some themed terrain to go with them, all scratch built out of foam board, pringle's tubes, bottle tops and other assorted junk.

The great thing is, if you make mistakes and it looks wrong, then for the orks it works even better! 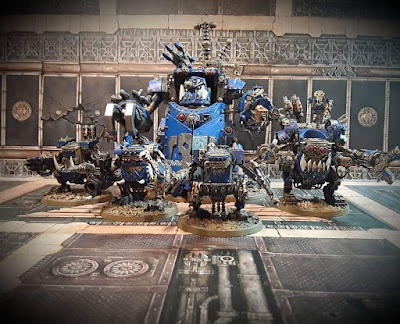 BLUETOOFS personal transport, his morkanought. Surrounded by his dread mob.

I actually converted the morkanought so that I can run it as a gorkanought too.

Probably the largest model I've painted, and he turned out ok in the end.

Overall the army has taken about 8 months to collect and paint, though I've recently started adding stuff to it. 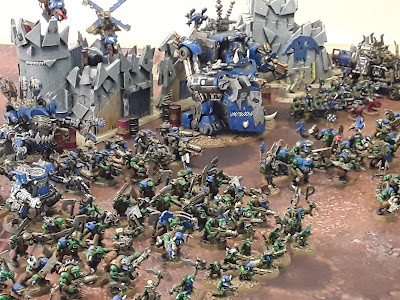 Theres so much variety within the army that it truly is one of those projects that will never be finished!

I really should get some of those cool looking new buggies too....oh and some mega armoured Nobs.... and actually some freebootas would be cool too.... 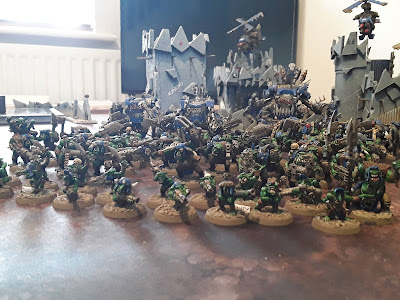 I hope your all enjoying whatever it us your doing with your hobbies, I certainly am.

I've made a video of my orks and chucked it on YouTube, 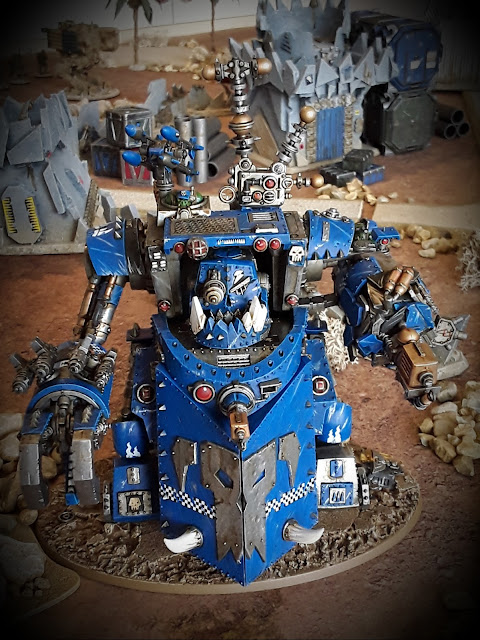