In 1809, the Austrians invaded Bavaria, a close ally of Napoleon,  What followed was for me, the most interesting campaign of the Napoleonic wars.  I won't go into any detail here but, for those interested, have a look here -LINK

Only 1 scale for me when considering Napoleonics, and that's 6mm!

I have looked at a few rulesets over the last year or so, namely Lasalle, General de Brigade and Black powder. With the imminent arrival of Blucher the subject of basing once again rears its head....What to do? 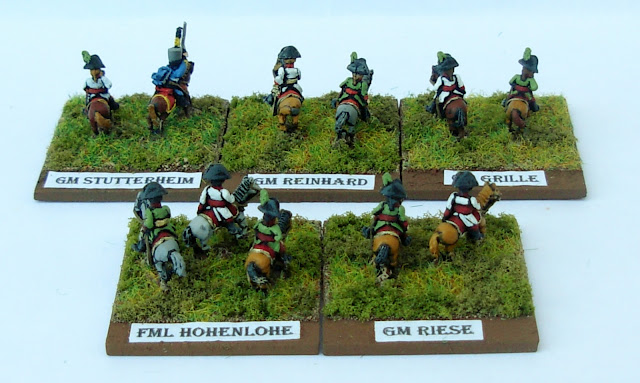 Hungarian line infantry Regiments were divided into 2 line Battalions and a reserve or Depot battalion, during times of war the 3rd Bn would also be mobilized and the regiment at full strength would have all 3 Bns. The Bns were divided into 6 line companies of 160 men each, with a further 2 companies of Grenadiers from the regiment who would be detached to form converged Grenadier Bns, that normally formed the Army reserve. As such, the Hungarian regiments were larger than the "German" counterparts.

I have 3 battalions for this unit.  It was a large Hungarian regiment, the uniform is shown to the left.  Although the unit probably wore the Shako in 1809.

The Hungarians typically had larger Bns, and were distinguished by their blue trousers.

The collars and cuffs were Yellow.

Another large Hungarian regiment, with 3 Bns.

A large Hungarian regiment, this time ive only got 2 Bns, the 3rd being detached somewhere..

German line infantry Regiments were divided into 2 line Battalions and a reserve or depot battalion, during times of war the 3rd Bn would also be mobilized. The Bns were divided into 6 line companies of 120 men each, with a further 2 companies of Grenadiers from the regiment who would be detached to form converged Grenadier Bns, that normally formed the Army reserve.

These are a german regiment, slightly smaller establishment than the Hungarians, but still with 3 Bns. 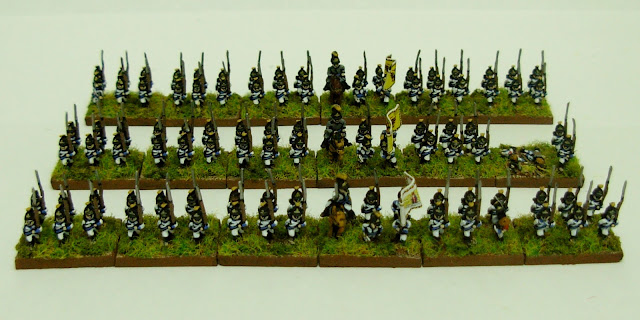 Another German regiment, this time only 2 Bns

Cuffs and collars were sky blue. 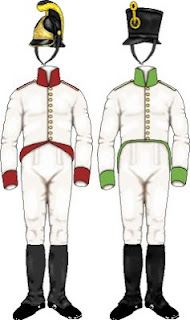 Another german unit, again only 2 Bns.

The unit started with dark red facings, but later changed to green...probably to confuse wargamers in later centuries...

True skirmish capable troops, quite a rarity in the earlier Austrian forces.  These were armed with rifles and carbines, well trained and were a match for most other light troops of the period, although generally let down by their actual use by higher command.

I have done 2 Bns of these, deployed in mixed order. 3 bases formed and 3 bases in skirmish order. 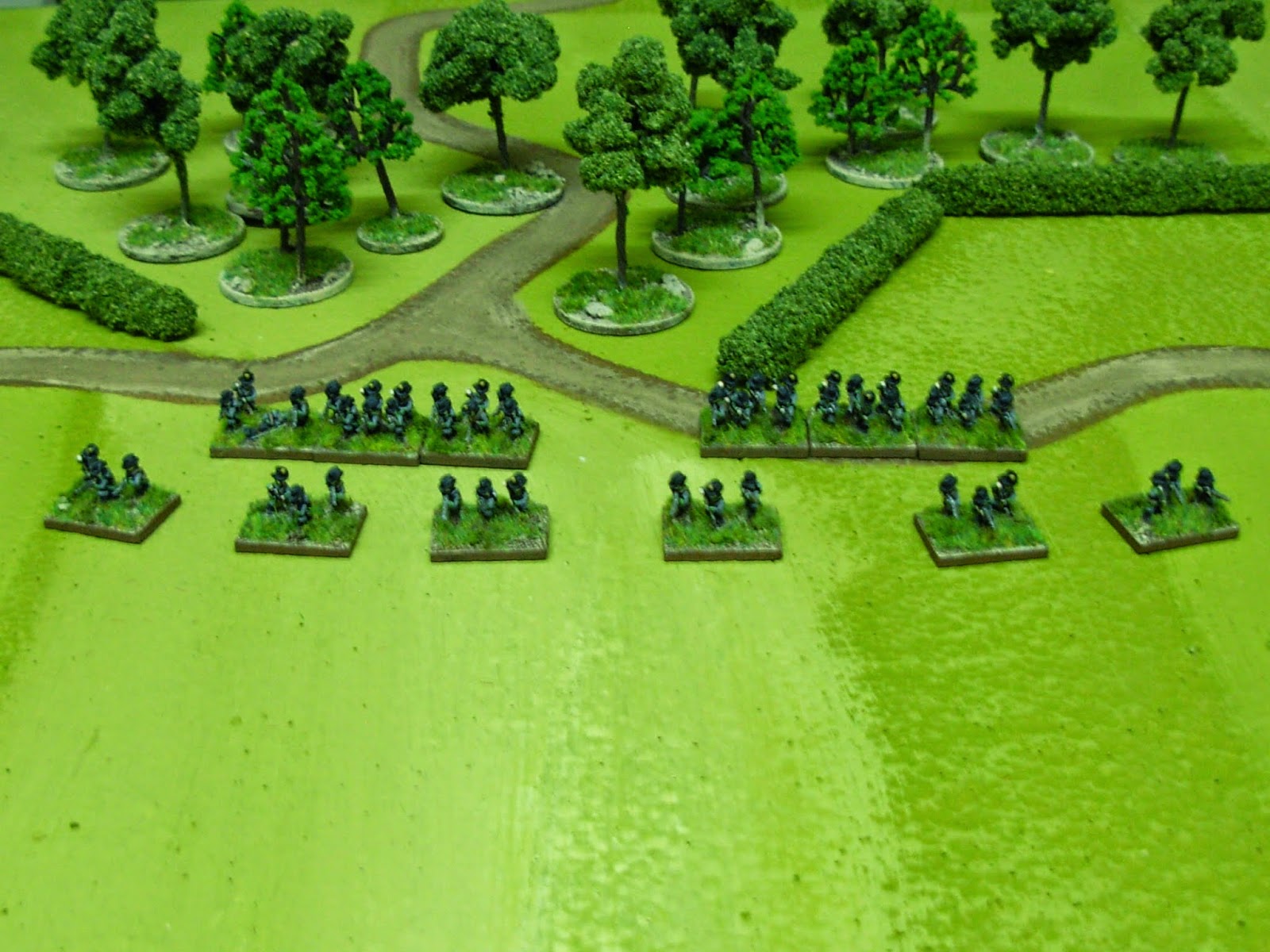 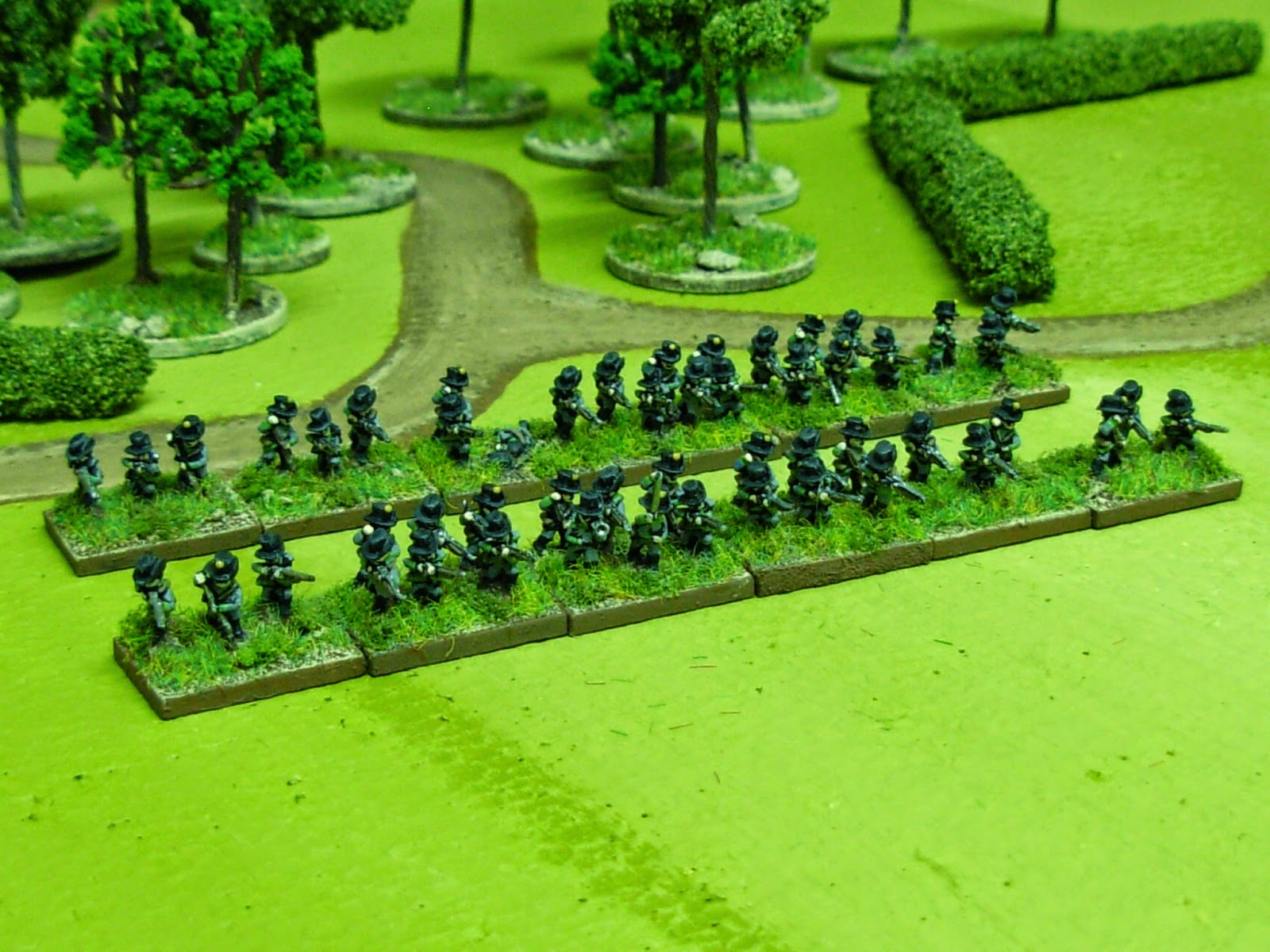 Good quality skirmishers, recruited from the border region known as the Grenz, these troops have years of experience fighting the Ottoman Empire. They were used as skirmishers, but when forced to use conventional tactics and operate as a regular line infantry regiment they performed poorly.

My Grenz are based as skirmishers. 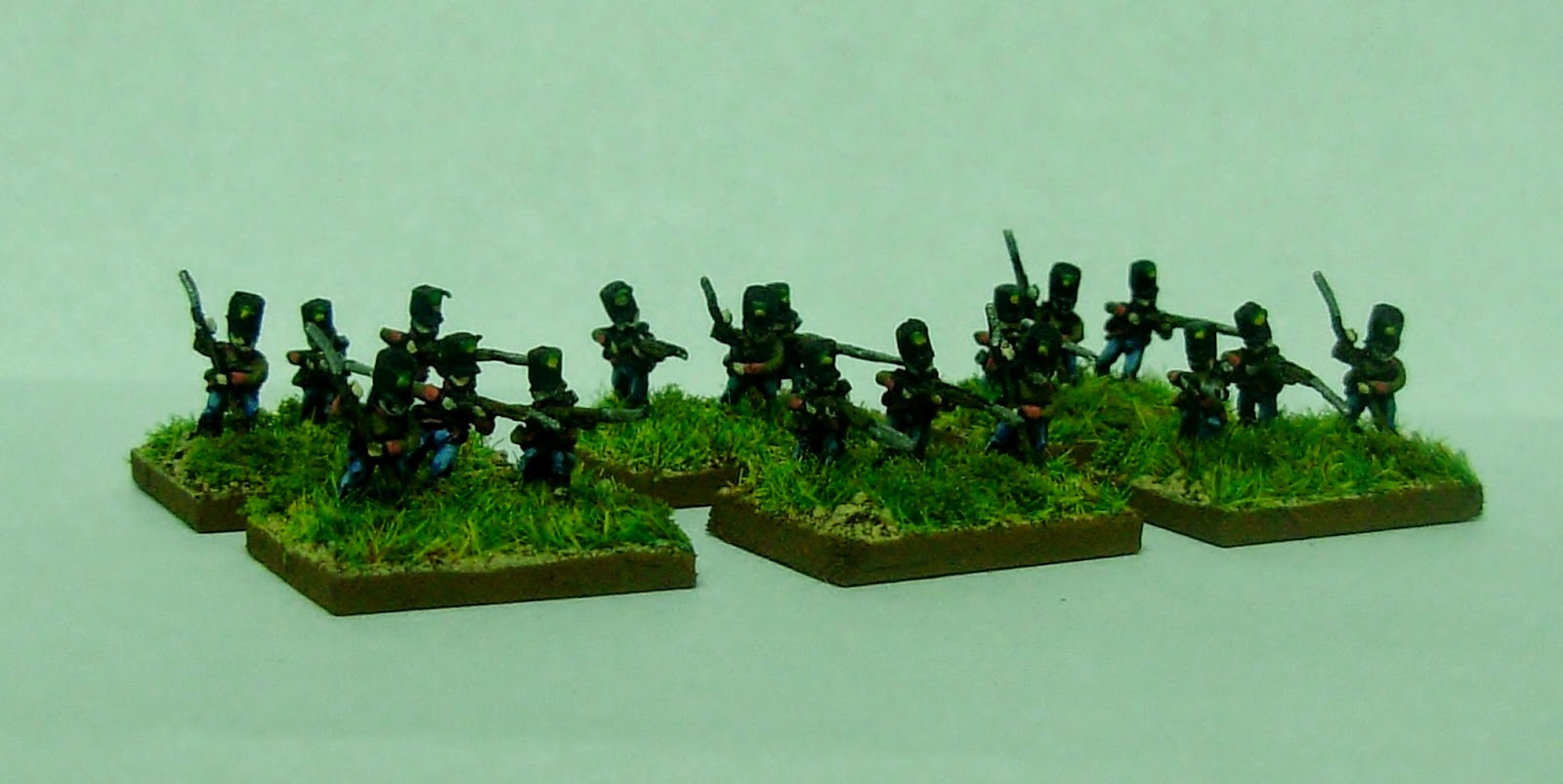 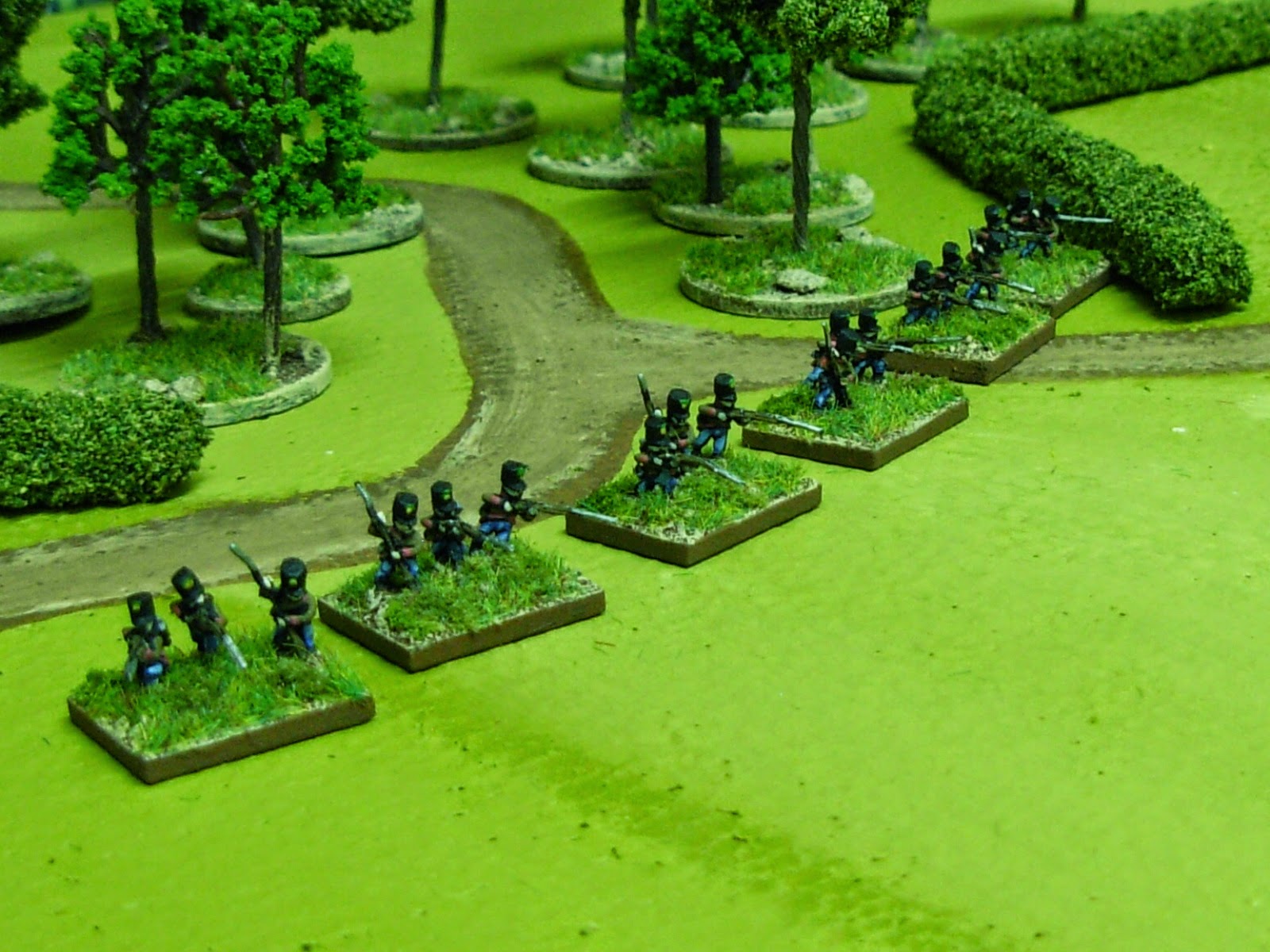 Another unit of Irregular infantrymen. 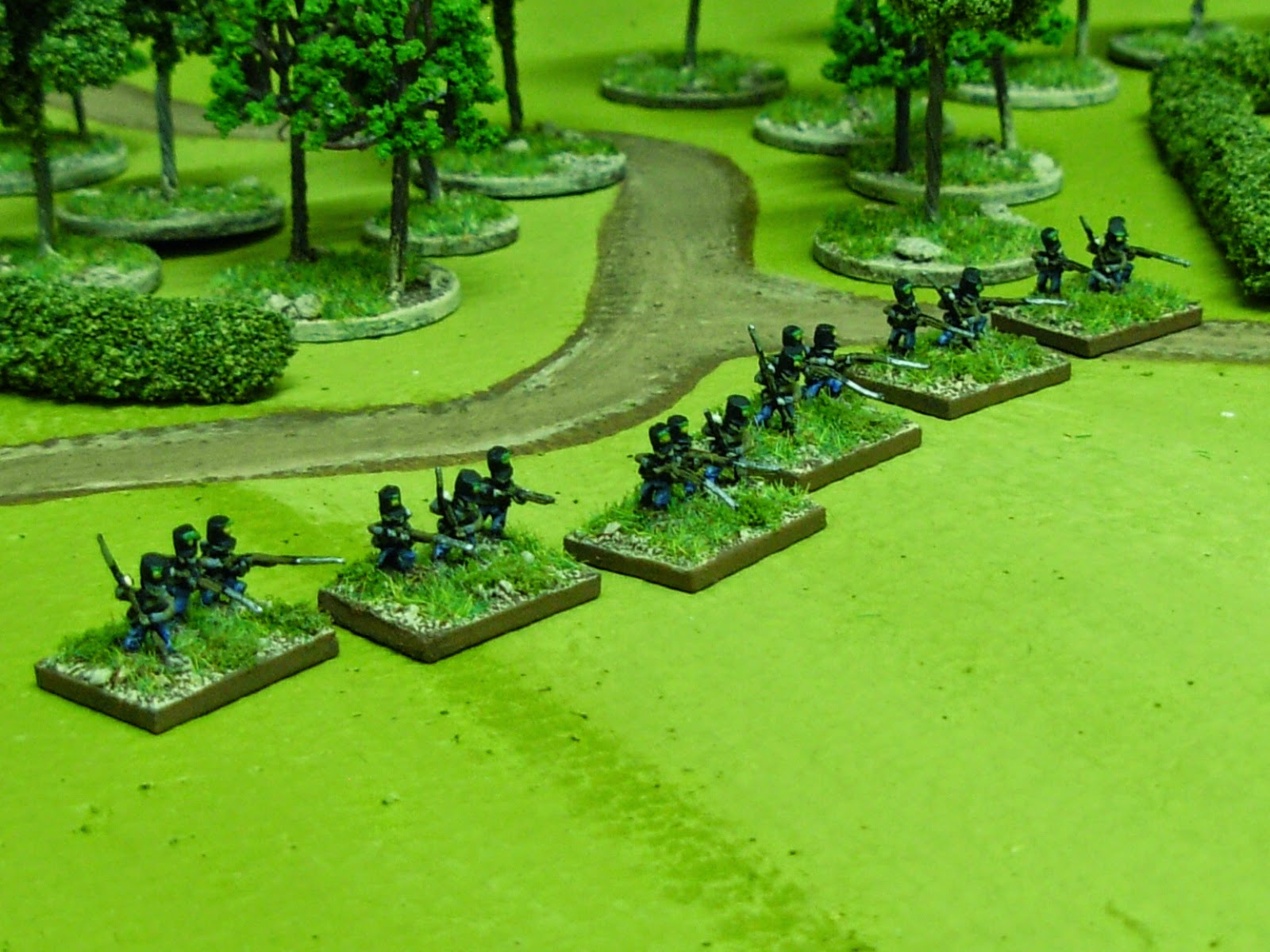 The Austrian army was reformed in 1808/9, and many landwehr (militia) units were formed, as well as independant Freikorps units, these units are interesting because of the different uniforms, but less useful on the battlefield!

The Carneville Freikorps were the smallest unit in the Austrian army, numbering about 330 men in total. 2 squadrons of Hussars and 2 companies of Jagers. The term Jager is used quite loosely as they were not as well trained as the regular Jager units.

I have painted them up in the earlier uniforms, but suspect their uniforms had probably changed by 1809, but never mind, they are a welcome splash of colour in an otherwise white coated army.

The Infantry were very unfortunate in 1809, having made it to the Essling battlefield, they were attacked by French light cavalry on the eve of the battle, and ceased to exist as a unit, with about 60 survivors.... the hussars formed part of GM Stutterheim's command, operating east of the village of Essling throughout the battle. 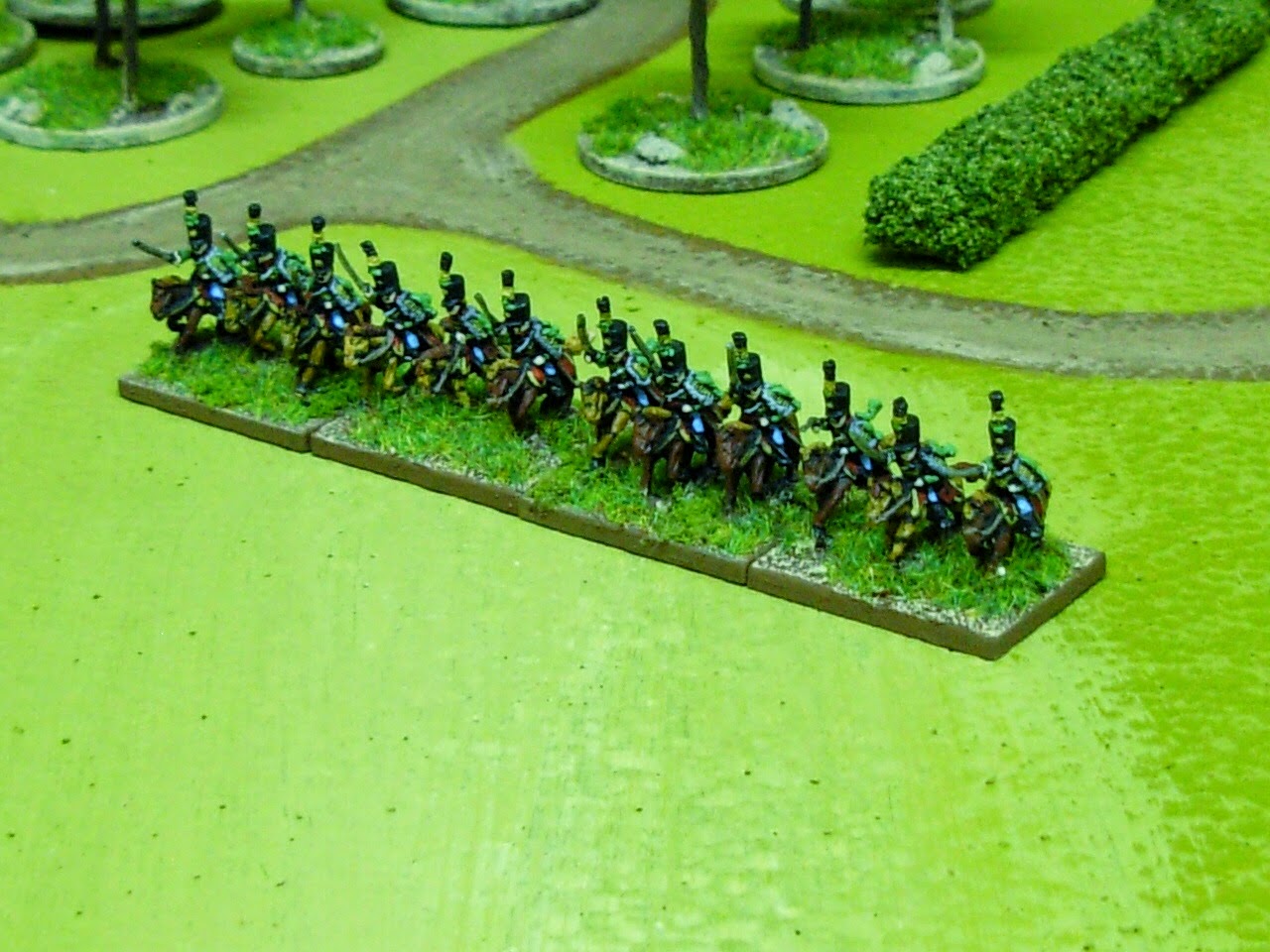 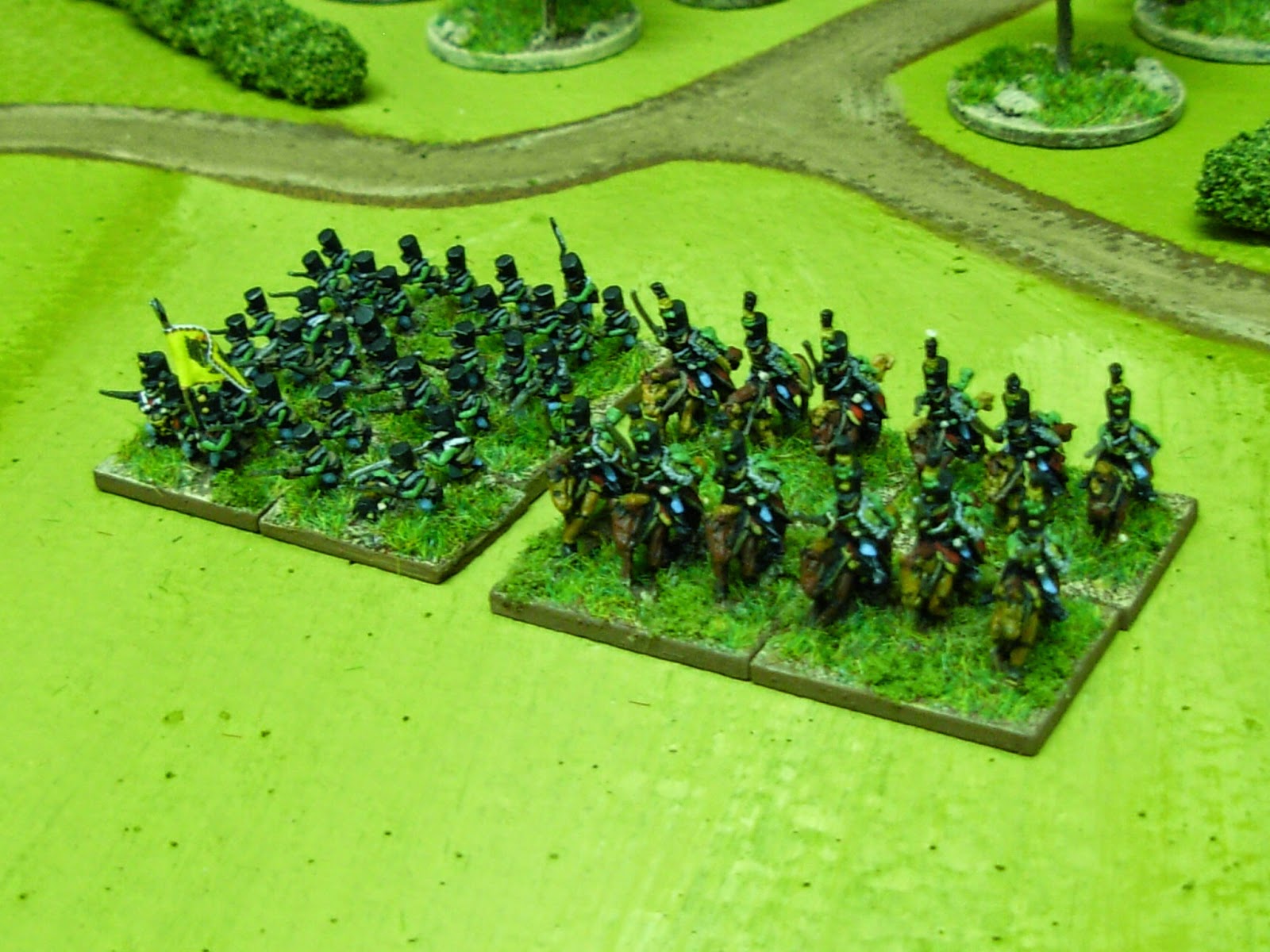 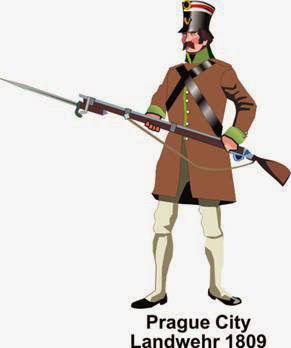 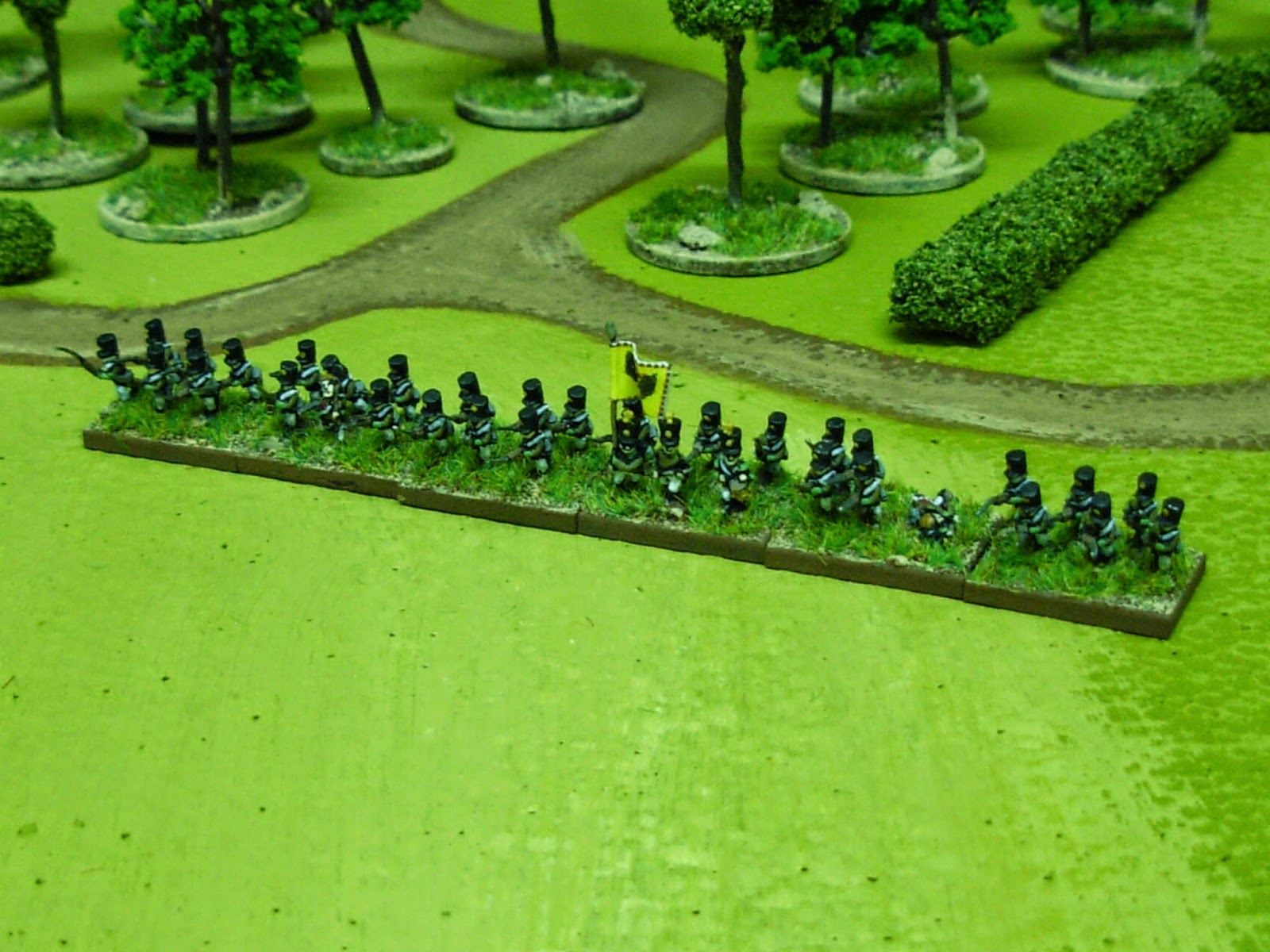 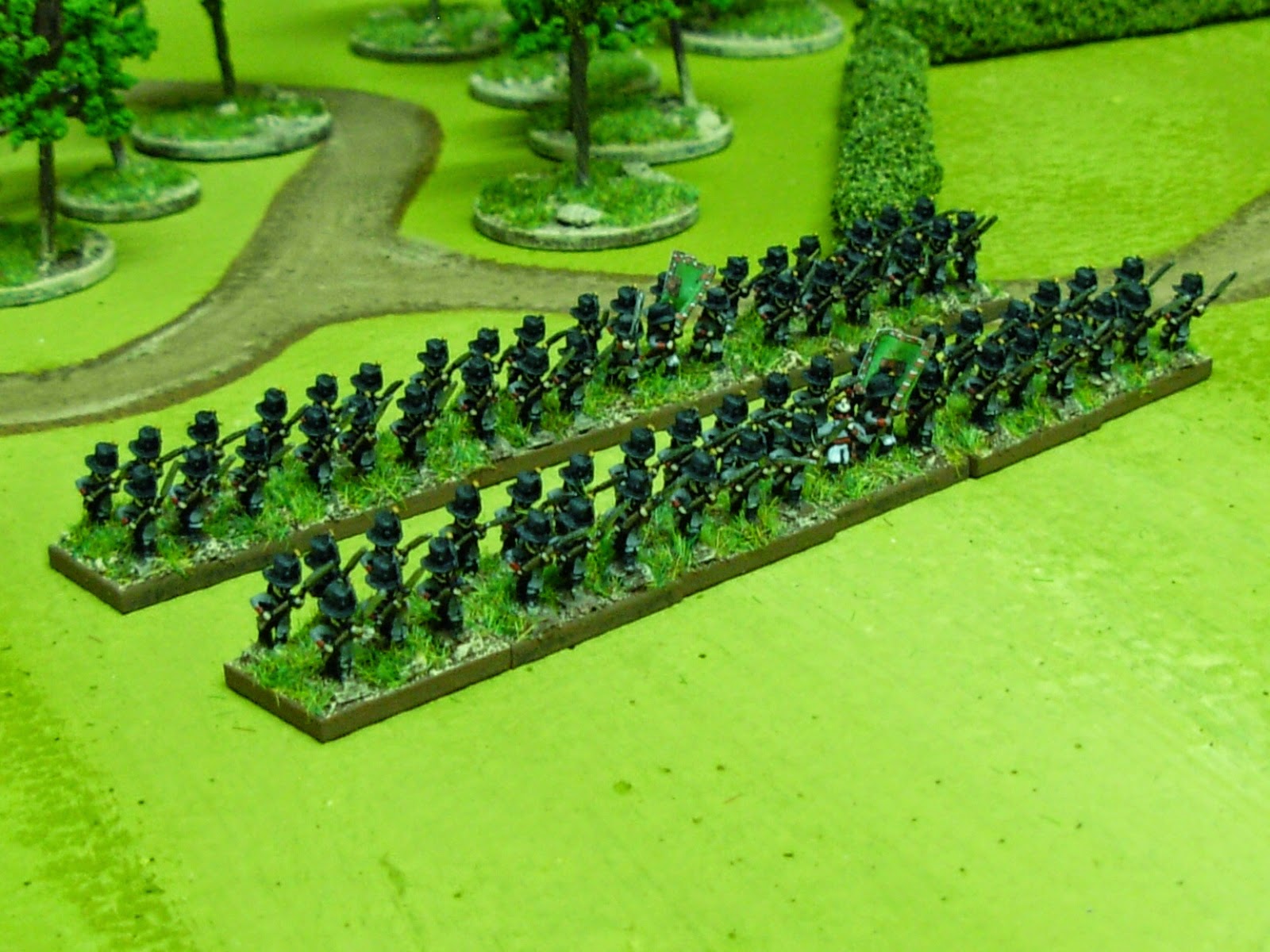 The artillery was divided into two branches, the foot artillery and the cavalry artillery.  The cavalry batteries were not however true horse artillery. Due to a lack of horses, most of the gunners either walked or rode on the guns. they were therefore slower than other armies.  The gunners wore red piping's and facings, but the foot artillery employed helpers, that wore blue facings, these men were unskilled, and did all the manual work. 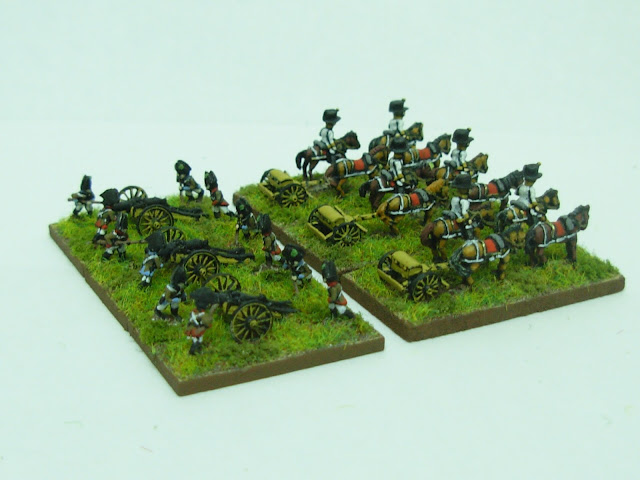 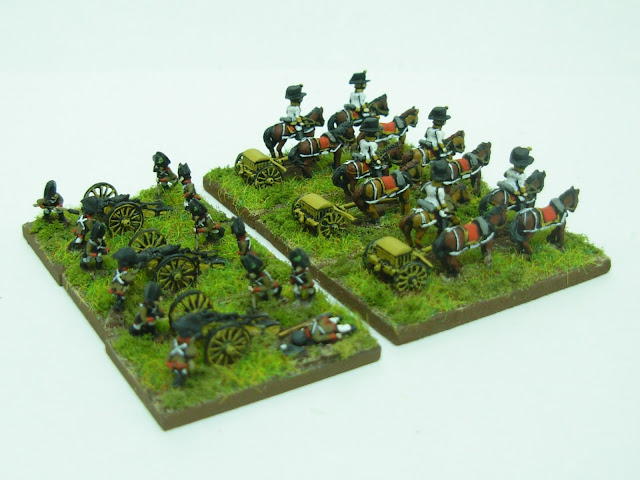 The Cavalry were divided into the light cavalry and the heavy cavalry.

The light cavalry were divided into "divisions", so a typical unit of 8 squadrons would be divided into 2 separate units and used in different formations and brigades during a campaign.

The Rosenberg chevauleger had dark red facings. A fairly small unit, split into 2 separate divisions, of 4 small squadrons per unit. 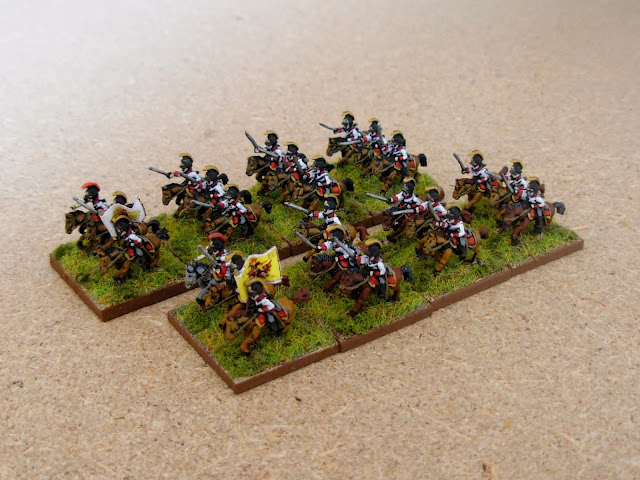 I've have painted up 6 squadrons of this large Hussar unit, each squadron consisting of 120 cavalrymen, double the size of the Chevaux Legers.

The unit is split up into 2 "divisions". 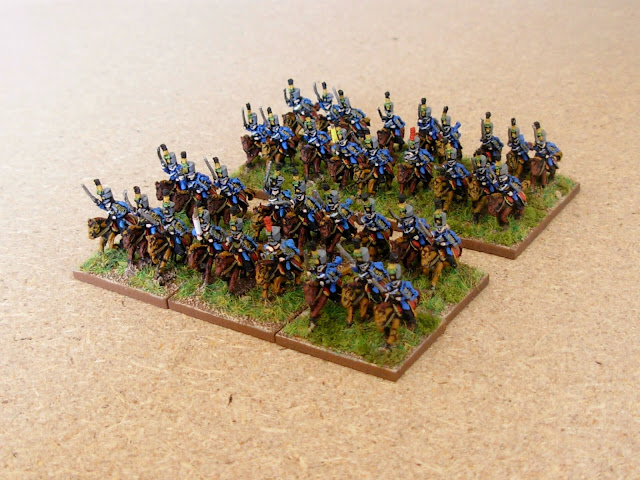 The only "lancer" regiment available in the Danube campaign in 1809, a large unit consisting of 970 men (on Paper at least).

I Have painted up 6 squadrons, and split the unit into 2 separate Divisions 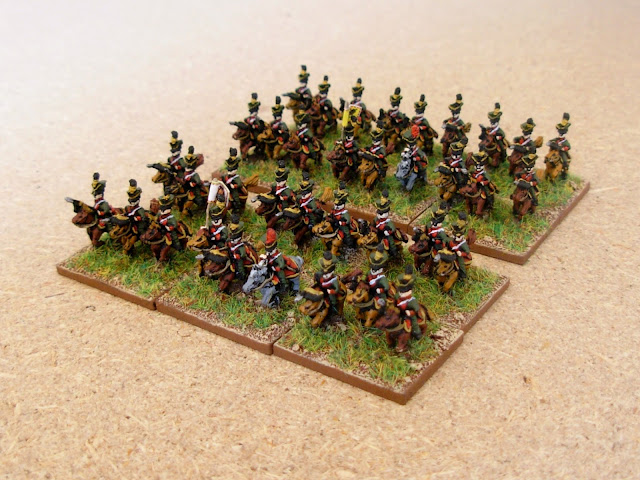 More updates as i get stuff painted!