Last week while waiting for my order from Legio Heroica (Crusades stuff) to turn up, I thought id paint up some of the Command decision 15mm stuff I bought a few weeks ago. 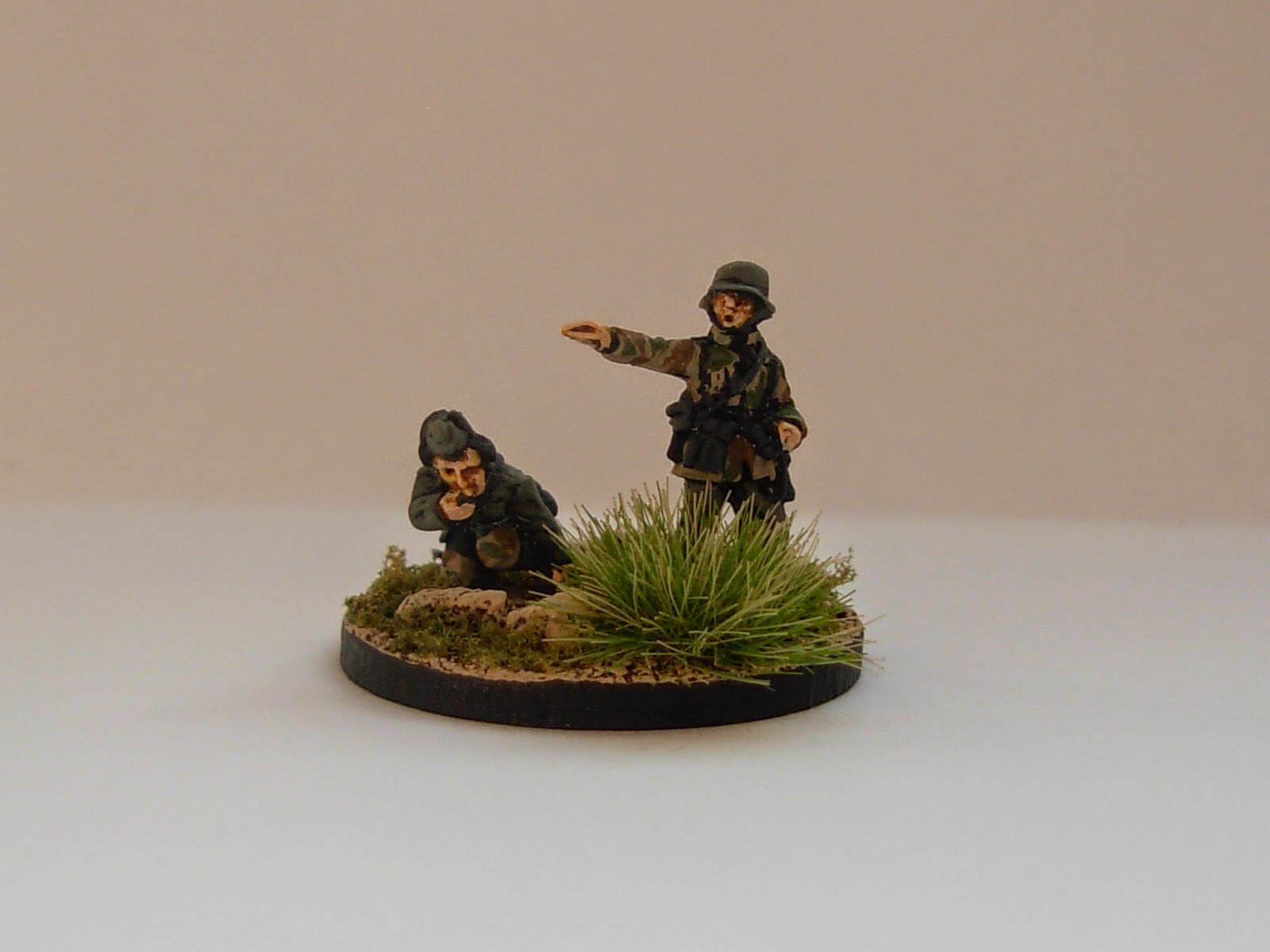 I reckon I could use this as an observer team too. 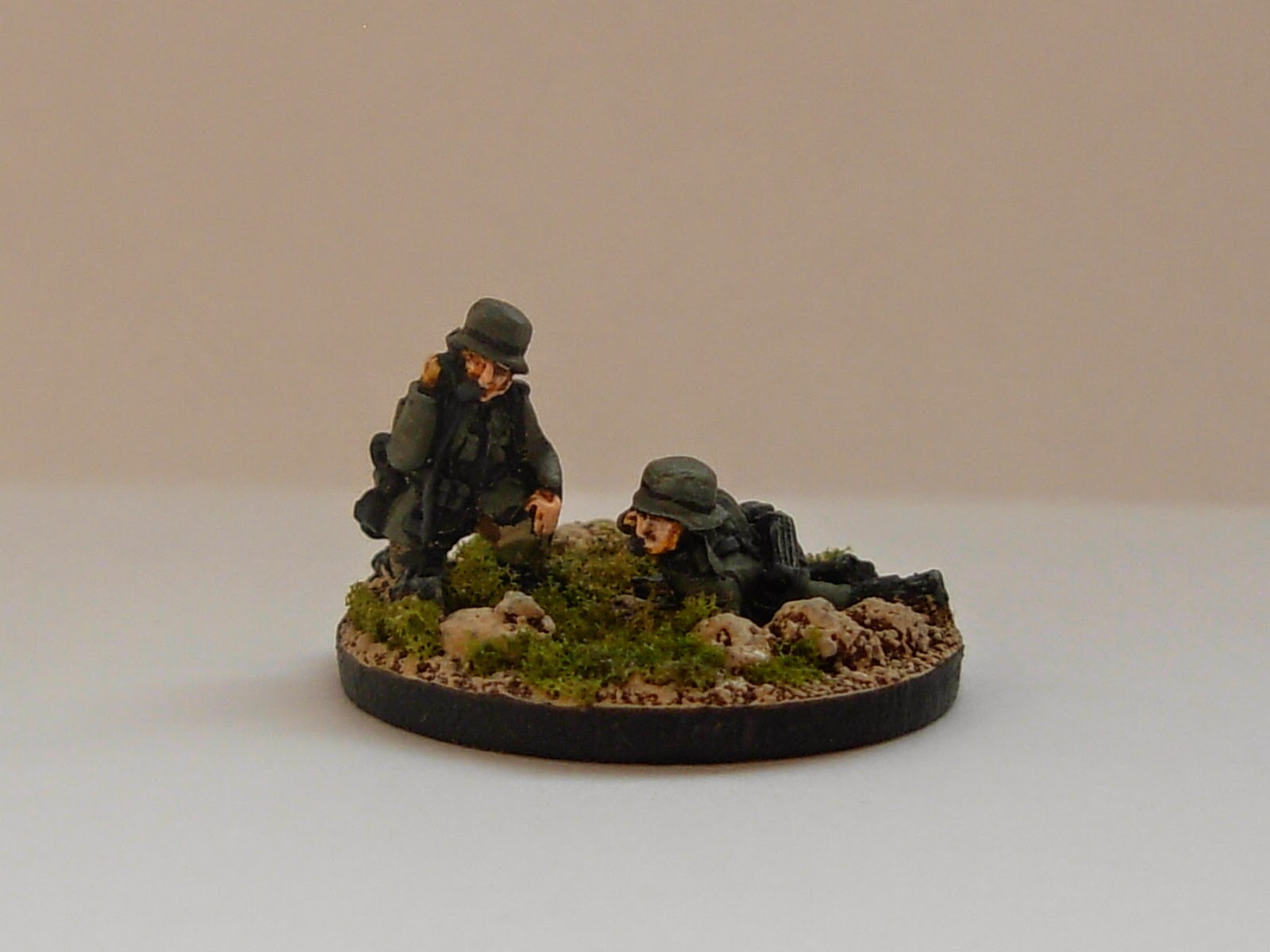 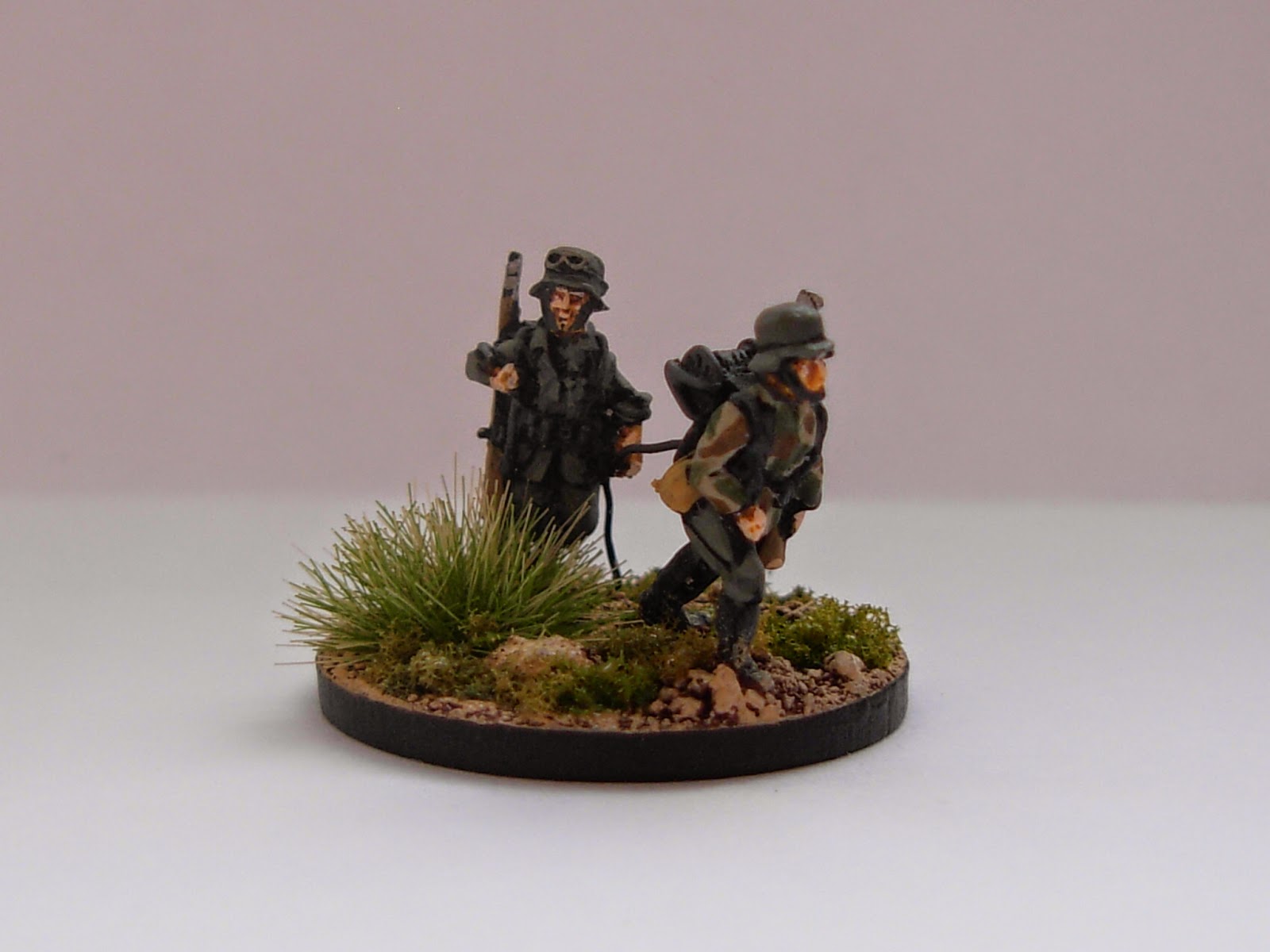 A very simple conversion, all I did was drill a small hole in the wire spool, and another in the guys hand, then attached a thin piece of wire, hopefully it looks like hes helping to guide the wire out.


These bases feature some grass tufts that I got from Tagima1 tufts, pretty good they are too. 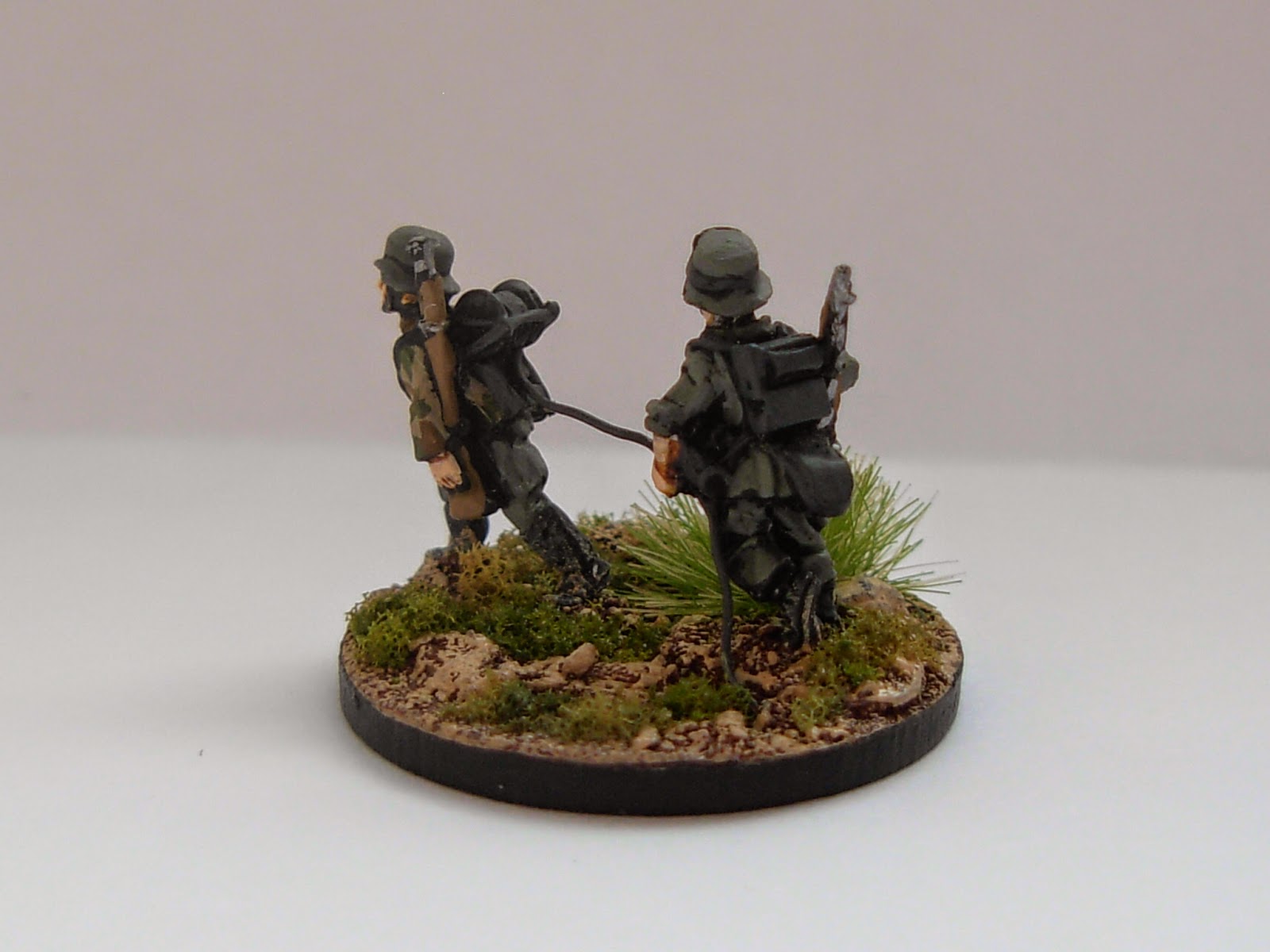 Well, the crusades stuff turned up on Friday, along with a load of German tanks!  See below for a blurry picture of my small  painting desk/shelf in the cupboard! If you look closely you will see I have started on some Cavalry, updates soon! 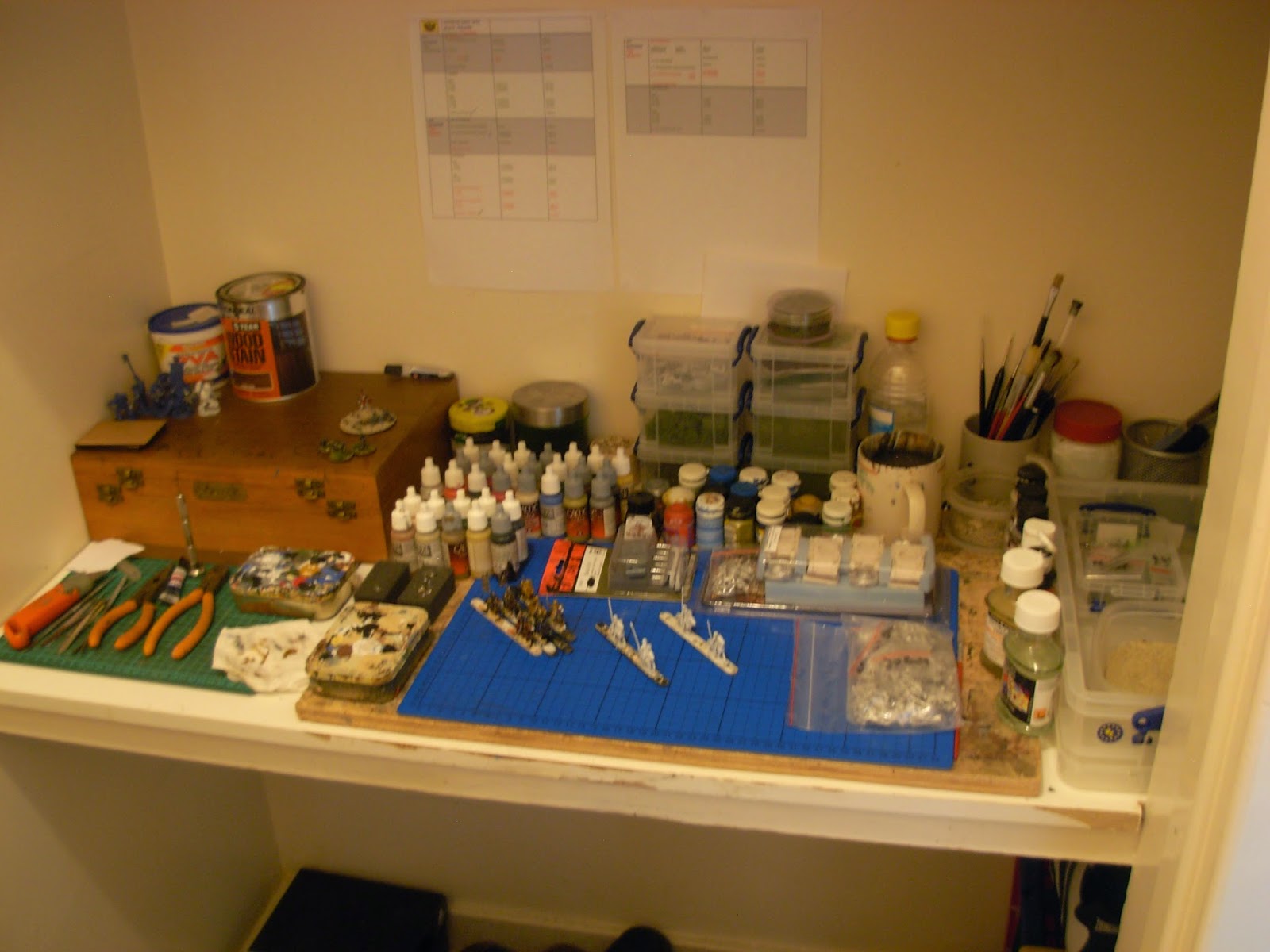 An alternative to AP dip?

Well its happened again. Bloody AP DIP. The problem is that its in a little tin, and it constantly dries up, a bit of a pain considering it costs about £20.00 a go. So I have tried hammering the lid back on, storing he tin upside down, no good, still ends up really thick with a hard skin on it.

So I bought a big glass Jar, with a steel screw on lid. I put the dip in that, thinking it might work. I thought wrong. It still has a thick skin and I cant get the bloody lid off. It has welded in place, ive tried everything from soaking in terps, chipping away with a Stanley knife, I even had a go with a hack saw. Thoroughly pissed off with it.

So, im going to get a drill, make a hole in the top and put it in a golden syrup tin....once its gone im never buying it again.

I need an alternative quick shade method, that doesnt involve arseing about mixing floor polish and obscure inks etc.... Im thinking i'll base paint the figures, then gloss varnish, then ink, then matt varnish. Ive heard this works, as the gloss helps the ink run into all the creases etc and it doesnt sit on the flat areas?

Anyone got any ideas?

I know i said I would crack on with the crusader stuff, but I had to clear the painting backlog thats been sat on the painting table far too long already. So this week I finished off my epic Tau army, it comes in at about 2000 points or there abouts. I have 1 more unit to do but to be honest im a bit sick of painting them so they will have to wait!

Heres what I have got done: 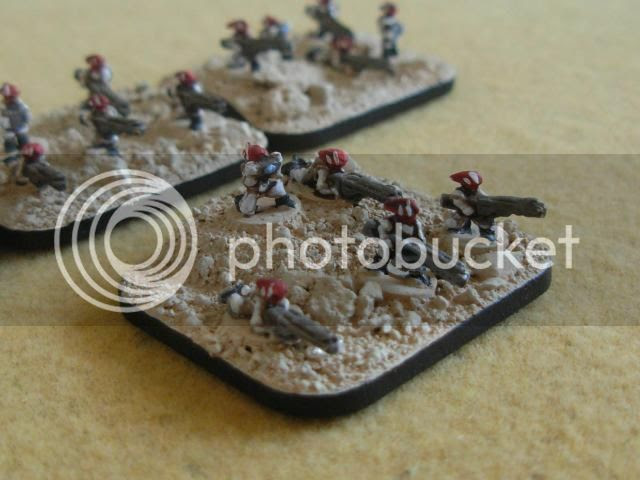 I have continued with the multilevel bases, as I think they look much better than just the bog standard flat ones. 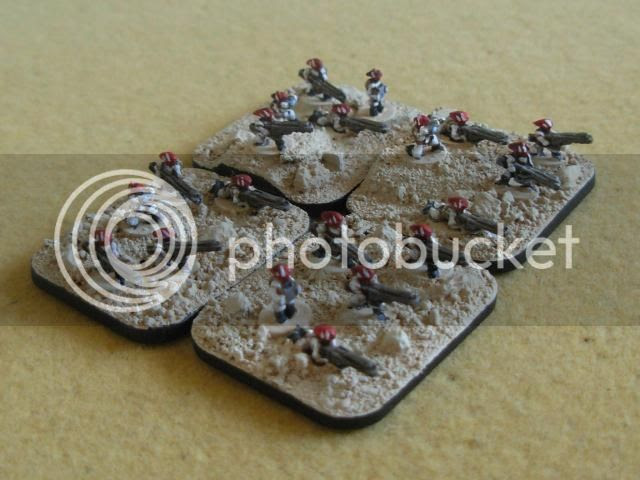 The full detachment, (they should have devilfish transports, but I have made up my own stats for them etc). 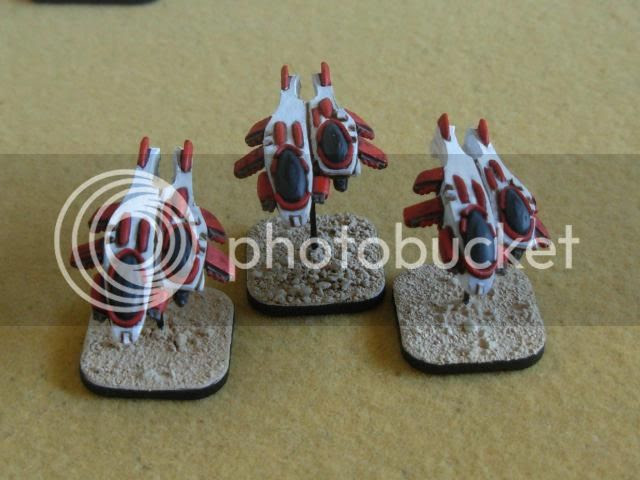 Another 3 Piranha recon craft, I can add these to either the snipers above, or the recon skimmer group. 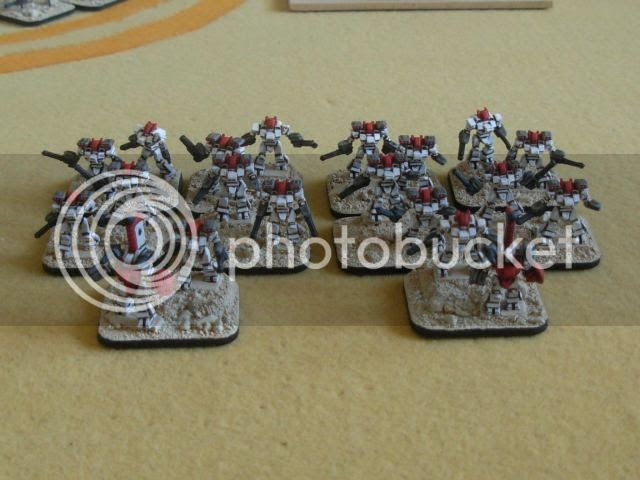 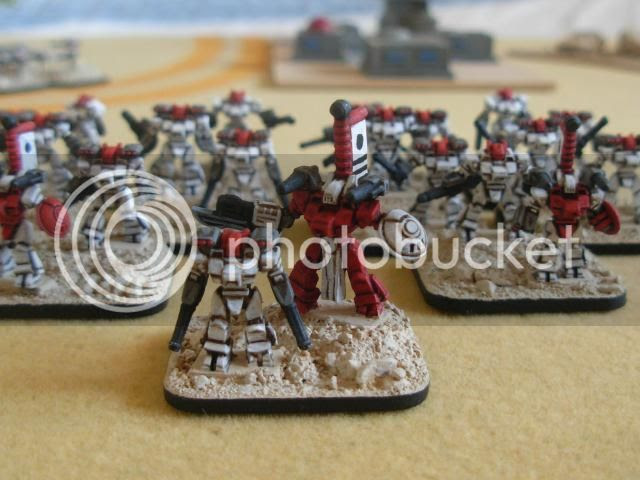 
I have also painted up the shas o. The biggest battlesuit, and the army commander. I can swap out one of the shas el commanders and use him in bigger games.... Or maybe ill just get some more battlesuits and give him his own unit... 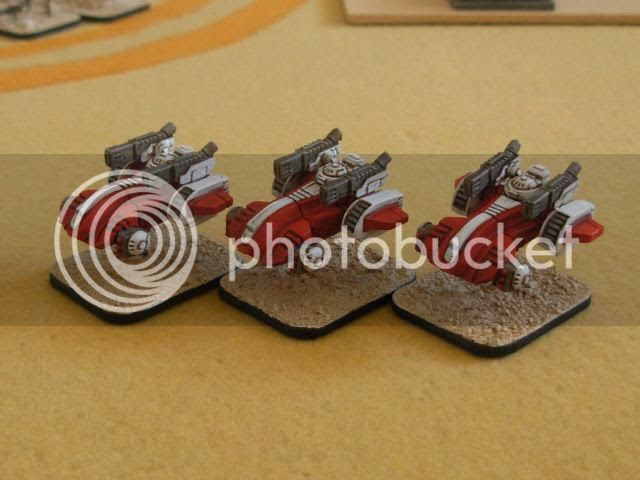 I have reversed the colours on most of the heavy support units in the army, just for a bit of interest and to reduce the amount of white paint being used! 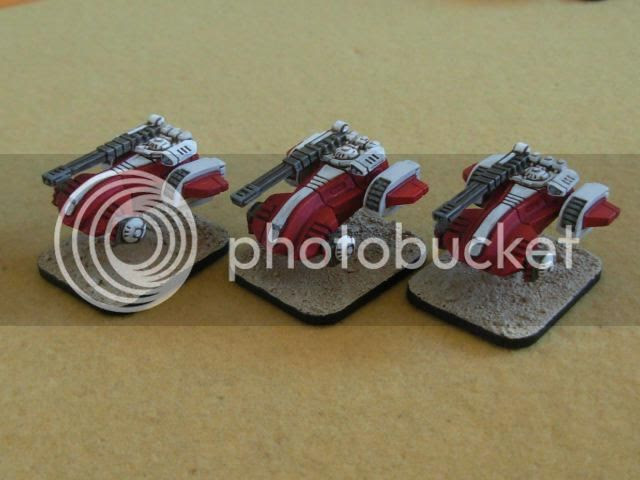 Hammerhead or railhead gunships, the tank killers of my army.

These should prove most useful when engaging marines and all the armour they tend to field. 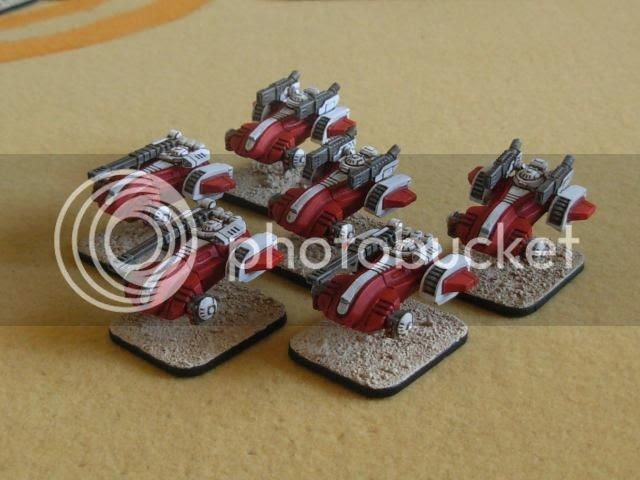 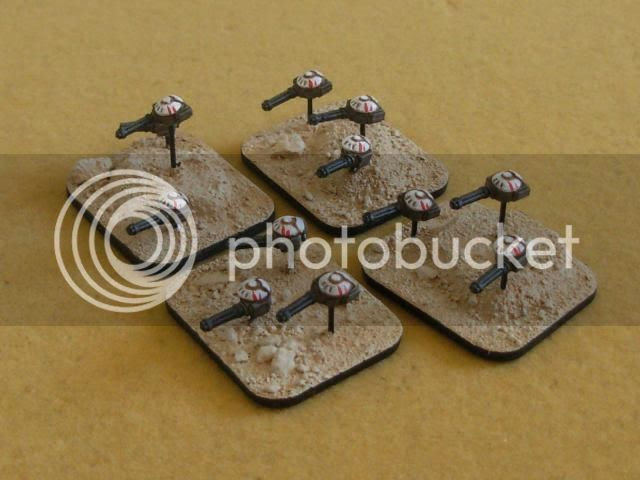 These can be added to alot of formations in the army, but ill probably attach them to the crisis battlesuits.

These are the spare gun pods from the hammerhead gunships, They fit the bill nicely I think. 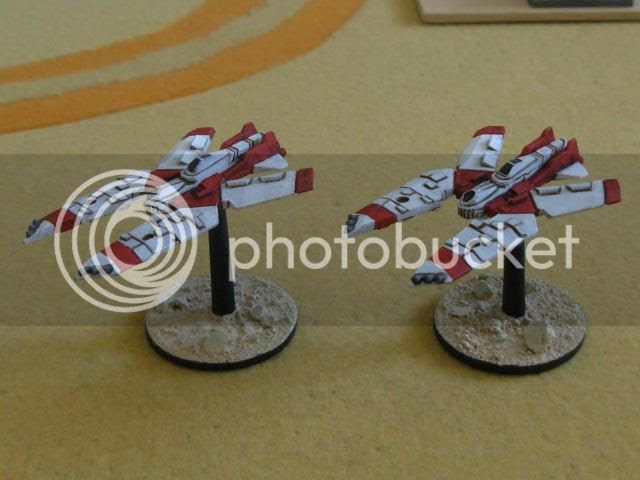 These are actually Dark Realm miniatures Kraytonian fighters, but as the "official" models are long OOP and the prices for them on ebay are just plain silly, these have been pressed into service.

I honestly prefer them anyway! 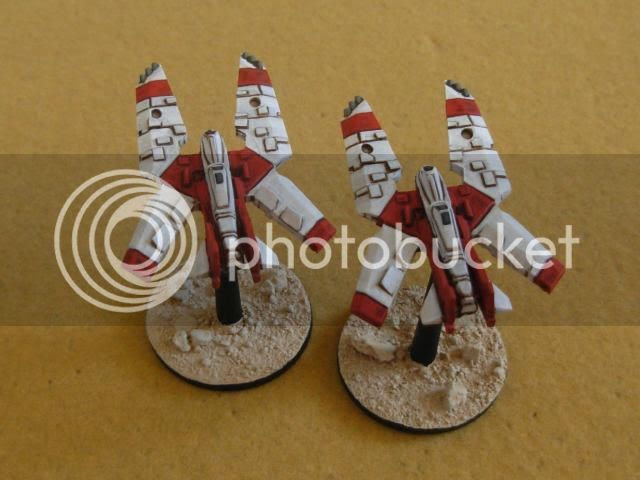 Barracuda's in tight formation on a bombing run! 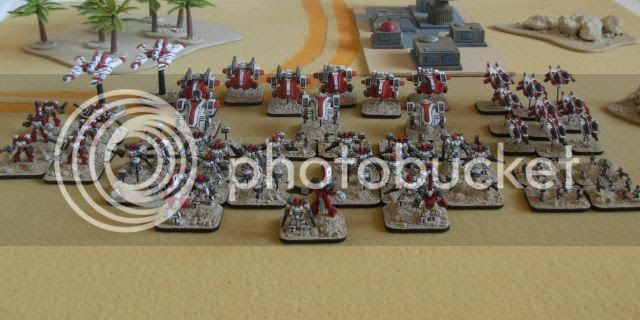 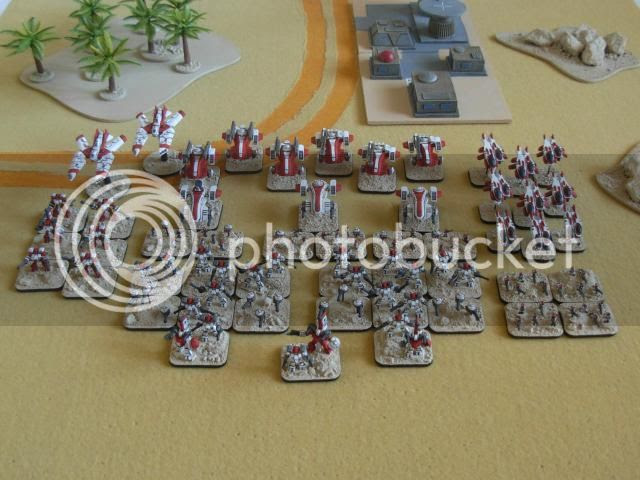 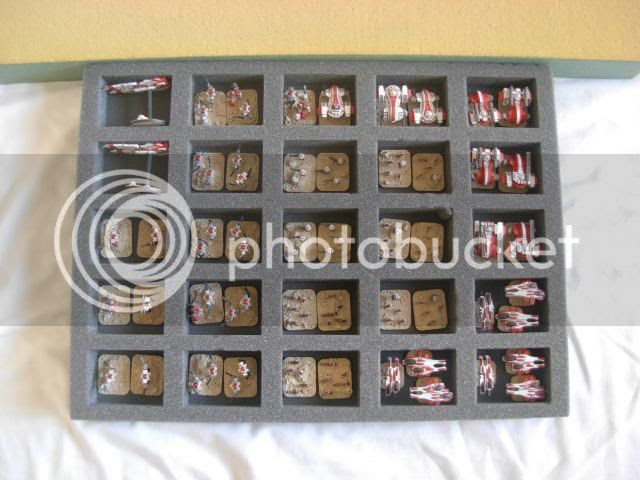 The great thing is, they all fit in 1 tray!

All my epic stuff can be seen HERE! 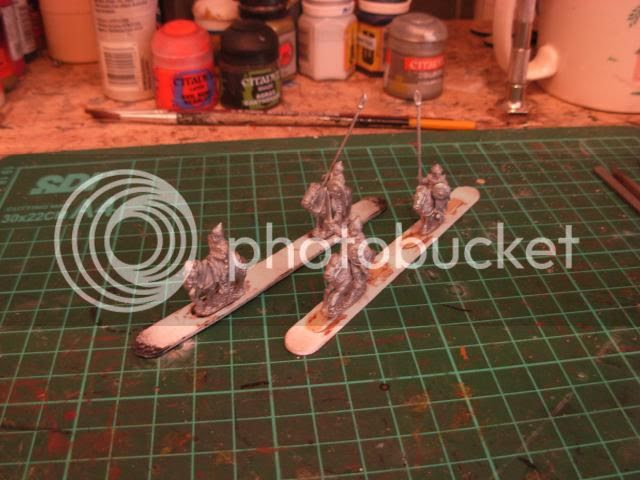 The Great Saladin himself!

Steve
Posted by Stig of the Dump at 12:57 No comments:

Im not in the habit of doing reviews, in fact this is my first ever. Nonetheless, I thought people might be interested. I have recently got back into WW2 gaming namely because of the excellent ruleset that is BG Kursk.

In BG Kursk, it gives the player the option to field some unusual units, (stuff that is often overlooked in other games) such as wire teams, stretcher bearers, signals relay teams etc. Being a soldier myself, I obviously understand how important these things are, even if they are not as "glamorous" or heroic than the "teeth" arms, ie your tanks and infantry etc....

Anyway, I ordered some stuff from Skytrex (link on the right) last week, and they turned up in Cyprus yesterday. Here's what I ordered: 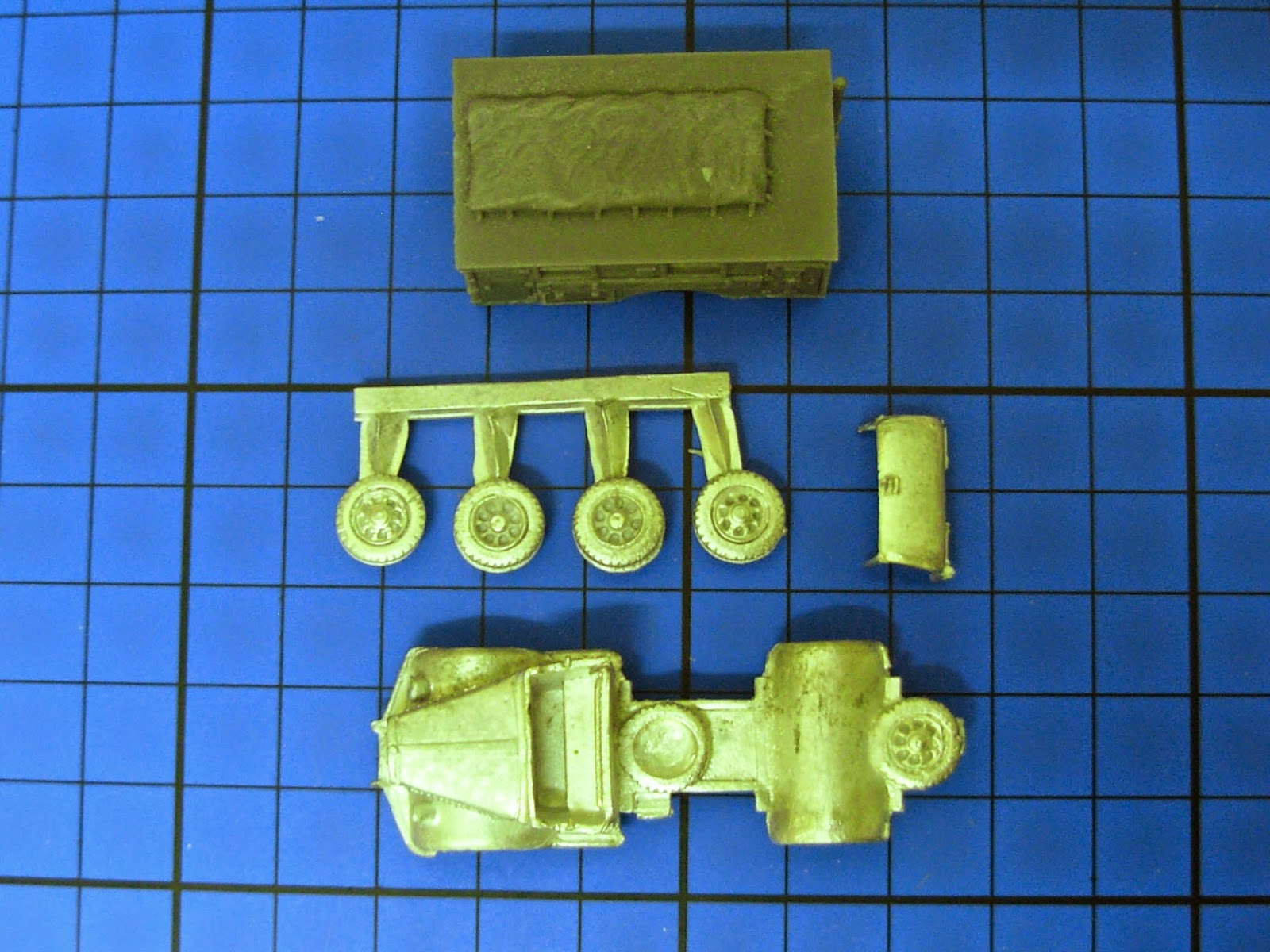 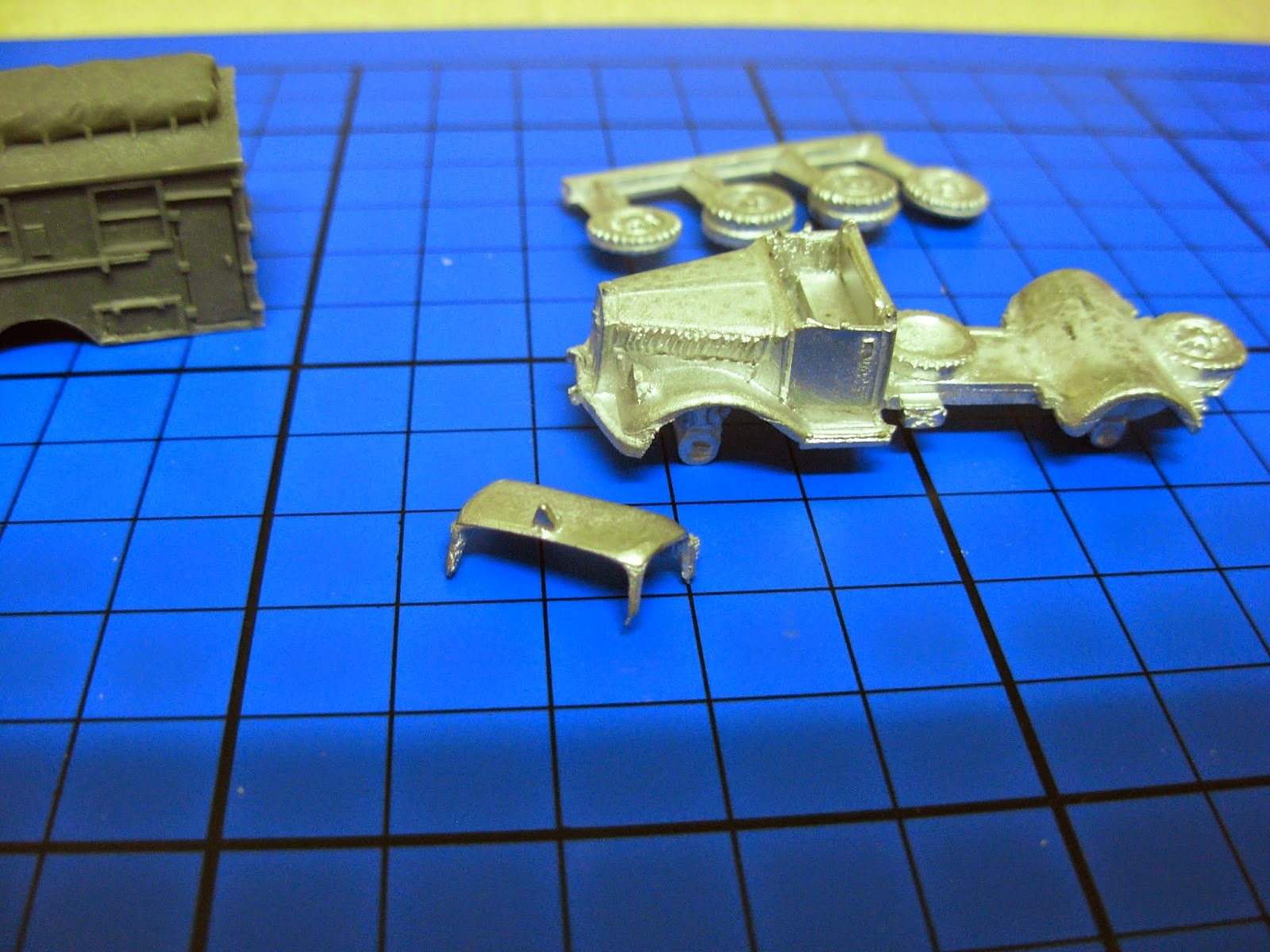 The command truck comes as a multipart metal and resin kit. As you can see from the pictures the command trailer is the resin part.

My only slight concern with this kit is the separate cab roof, which looks like it might be quite tricky to get into the correct position, and may take a bit of faffing about to get right.

On the plus side, it allows you to put drivers in there before the roof goes on. You have to buy the crew figures separately, it would be nice if they were included in the kit though. 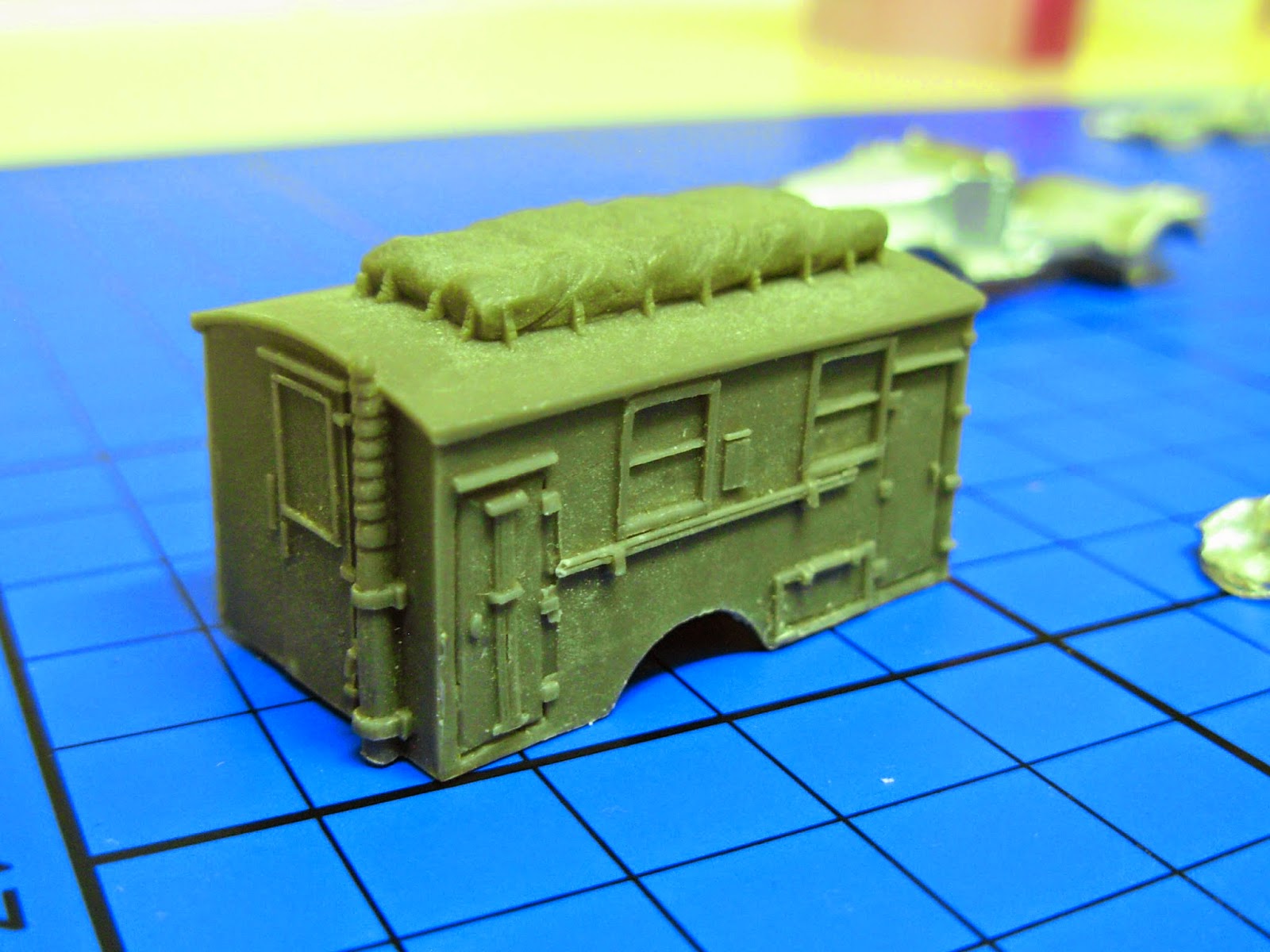 The best part about the truck is the resin bit, the detail is really crisp, no bubbles in the resin, and it fits the metal chassis perfectly.

Overall, very happy with this kit, although the inclusion of some drivers would make it better. 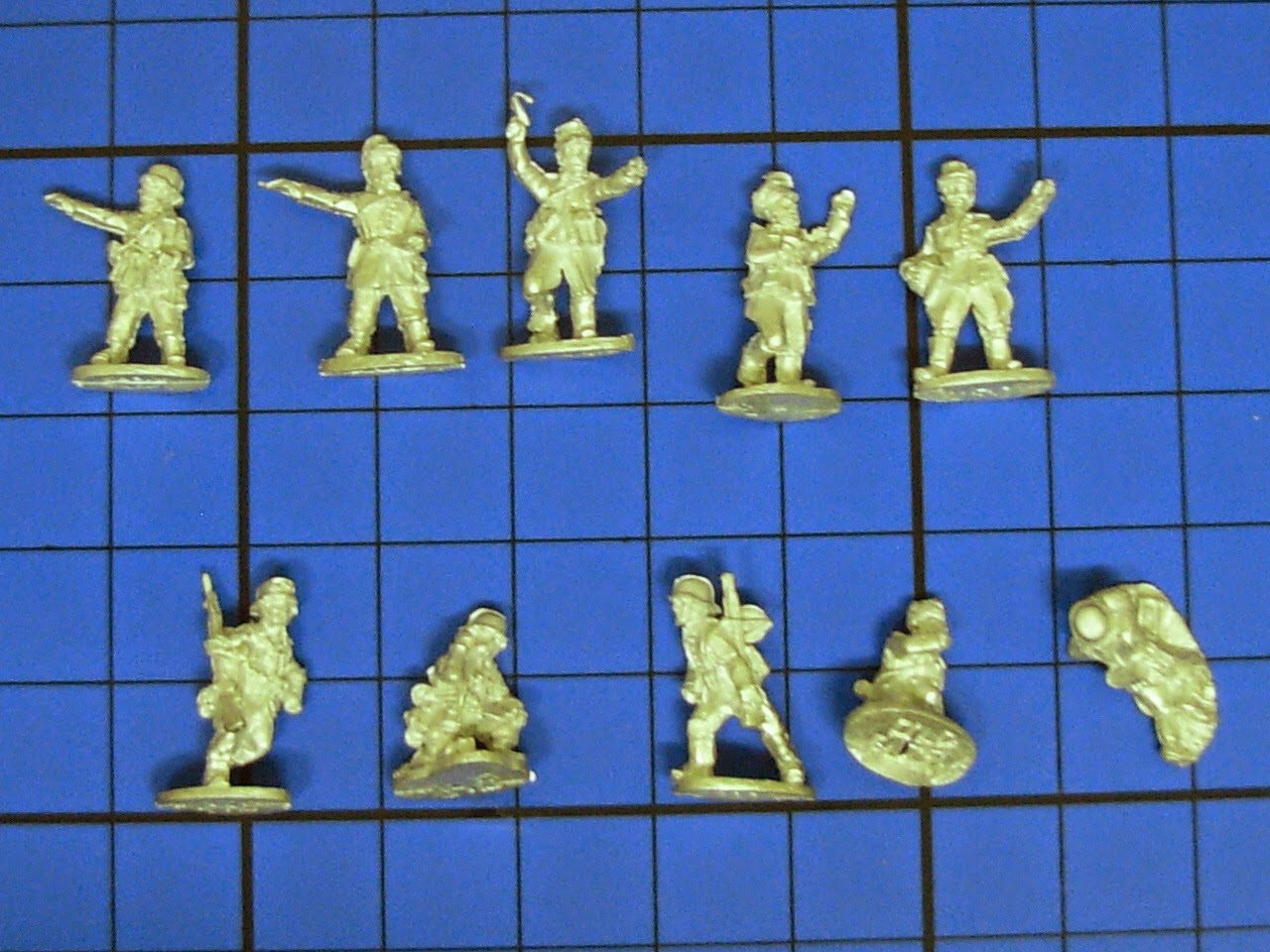 This pack contains 10 different figures. Thats right all 10 are different, which for me is pretty cool. So, on the top row we have the various officers, and on the bottom, radio operators, including a guy (bottom centre) with a reel of comms wire on his back. Very useful figures, hardly any flash but with a few mold lines, especially on the helmets, easy enough to remove though.

These figures are great. I have lots of battlefront, and peter pig figures and these I would say are better than either. 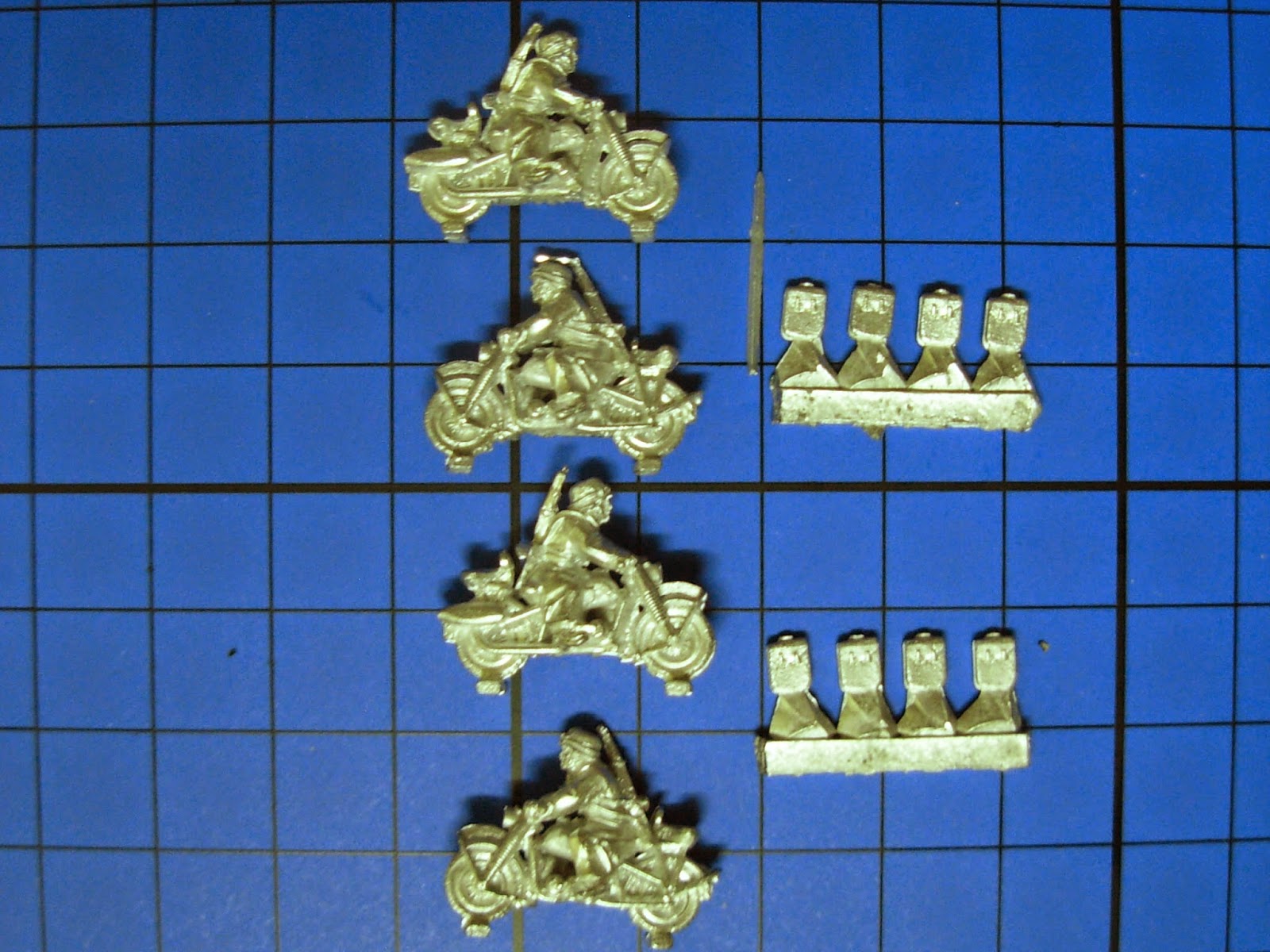 These are German dispatch riders, mounted on BMW bikes, really useful for BG Kursk. The pose is the same for all of them, but they are very detailed and there is only a small amount of flash, which should clean up in no time.

Also included are the separate dispatch bags, ill have to find out where to stick them, front or back?

German and Russian Casualties and stretcher bearers. (might as well do them both together) 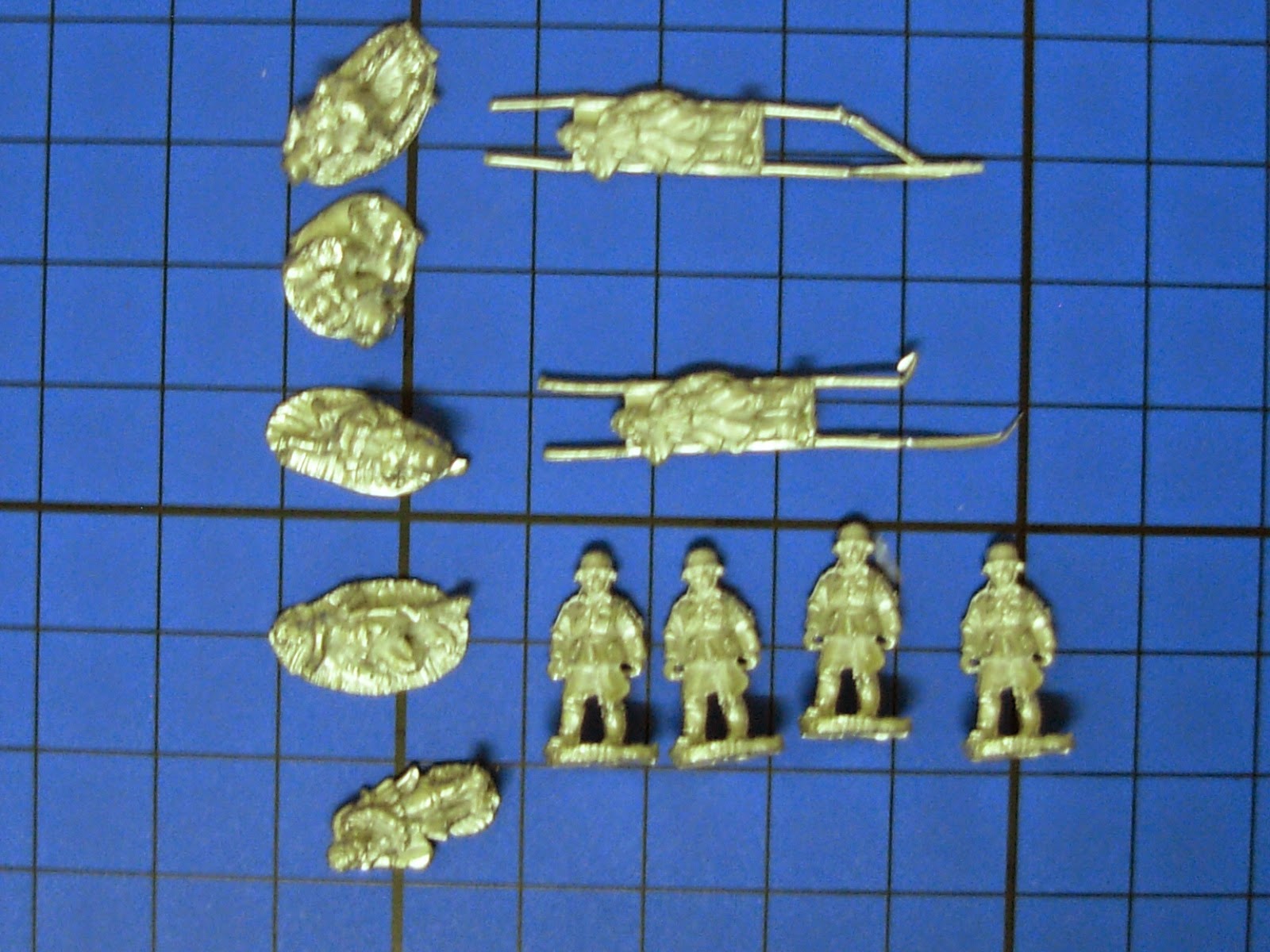 In the casualty packs you get 2 stretchers with casualties on them, 4 stretcher bearers to carry them and 5 casualties.

The quality of these sculpts is great, all the separate casualties are different, and the poor buggers look realistically posed, as if they have been thrown in a heap by an explosion etc... 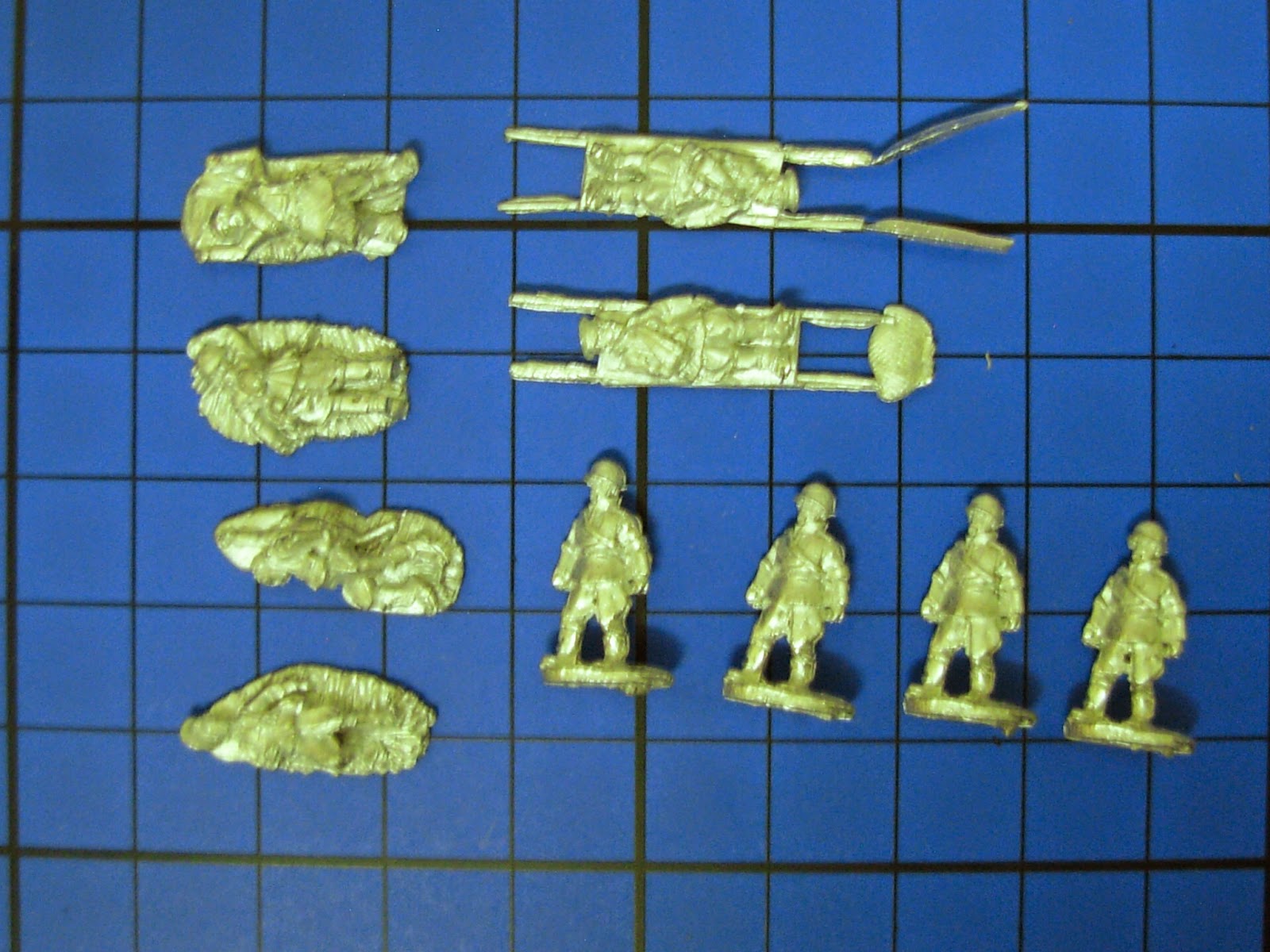 The Russian pack was the same, except that it only had 4 casualties, but again all different sculpts, realistically posed.

The hands for the stretcher bearers will probably need to be drilled out, no problem really, if you have a pin vice or similar.

This lot cost me just over £20.00. Value for money? most definitely, really useful bits and bobs that alot of other manufacturers don't produce, or if they do, they are part of bigger packs of stuff that you may not need.

I have been guilty of overlooking Skytrex, in favour of the more well known Battlefront, but these really are worth a close look, they have a large range, and still do the squad packs, very useful for skirmish gamers.

Anyway, happy customer here, just need to get some paint on them now!

I just found this series on Youtube, give it a watch its pretty good, and made in Russia, so its interesting to see it from the other side. We have all heard about the great encirclement's  and how the red army was unprepared in 1941, this series puts a different view across, and talks alot about heroic last stands and stuff.

Email ThisBlogThis!Share to TwitterShare to FacebookShare to Pinterest
Labels: WW2

A return to the Holyland

So I ran a little poll, to see what people would like to see get painted next, and the clear winners are the 15mm Crusade armies. Fair enough. 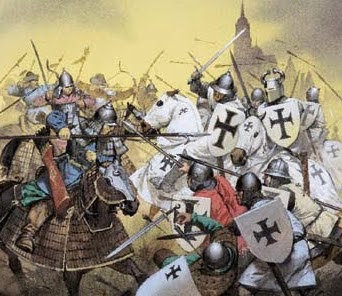 I have placed an order with Legio Heroica for some more bits, namely more Crusader Knights and some Turcoples to keep the nasty Muslim skirmishers at bay!

So over the next few weeks ill crack on with them. Its just starting to cool down slightly here so I will be able to spend more time painting hopefully.